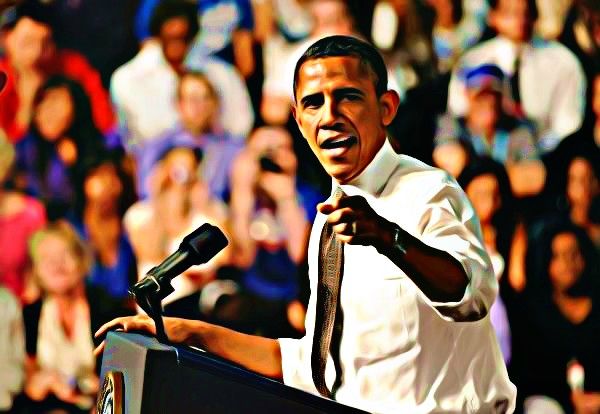 CBS News is reporting that President Obama has said that former President Ronald Reagan would have supported his plan to raise taxes on Americans who make more than $1 million per year, known as the “Buffett rule,” and to back up his statement he quoted the Gipper from a 1985 statement saying, “Some of those loopholes were understandable, but in practice they sometimes made it possible for millionaires to pay nothing, while a bus driver was paying 10 percent of his salary, and that’s crazy. It’s time we stopped it.”

And, oh surprise, just as the President Obama noted, Republicans never accused Reagan of being a “socialist” for wanting a bus driver to pay lower tax rates than a millionaire.

The President also mocked Republican Tea Party (GOTP) claims that his effort to pass the Buffett Rule — which would establish a minimum tax rate for those making more than $1 million per year in order to ensure they pay as much in taxes as lower-income individuals — amounted to “class warfare.”

“I know a lot of folks have short memories, but I don’t remember Republicans accusing Ronald Reagan of being a socialist or engaging in class warfare because he thought everybody should do their fair share. Things have just gotten out of whack,” he said.

Isn’t it amazing how it’s not class warfare when we lower the tax brackets for the wealthiest 2% while advocating cuts to the poor and needy?

The President quoted Reagan once again during remarks at Eastfield College later in the day in which he called on Republicans to pass his $447 billion jobs bill, which he sent to Congress last month. He noted in that speech that Republican House majority leader Eric Cantor has vowed not to let the jobs bill come up for a vote.

He went on to urge Cantor to “put this jobs bill up for a vote so that the entire country knows exactly where every Member of Congress stands.”

“Do your job, Congress!” he added.

Cantor spokesman Brad Dayspring responded to the comments by saying that “President Obama needs to understand that his ‘my way or the highway’ approach simply isn’t going to work in the House or the Democratic Senate, especially in light of his abysmal record on jobs.”

Ah yes, of course, the “my way or highway” tactic is the expressed copyrighted property of the GOTP House and the President isn’t allowed to use it. Well Brad, he just did, and the GOTP is going to have to put up or shut up. Vote it down and stand by it if you think it’s that bad of a bill; oh, and if I were a spokesman for a GOTP member of Congress right now, mentioning abysmal job performance is probably not the way to go, especially when you schmucks ran on the promise of creating jobs in 2010.

GOTP Senate Minority Leader Mitch McConnell has reportedly called for an immediate vote on the bill in an effort to show it doesn’t have the unified support of Democrats, but Democratic Senate Majority Leader Harry Reid objected to bringing up the proposal, offering Republicans the chance to formally move to a debate on the bill; they declined the offer.

Well sure they declined the offer; they don’t want to go on record for actually opposing the creation of jobs.

The President’s bill would reduce payroll taxes on both workers and employers, extend long-term unemployment benefits and invest in public works and teachers, police officers and other public servants. It would be paid for through the tax increase on high earners and the closing of some corporate tax loopholes.

And what’s to argue here? Ah yes, I forgot, Darth McConnell has sworn an oath to the Dark Lord to make sure President Obama only has one term, and Cantor is a frightened little rabbit who likes to make a loud noise from his hutch but lacks the courage of his convictions to go on the record voting against it. Guess what boys? You’re already on the record opposing jobs, and it will come back to bite you in the butt come November 2012.

← Why I’m a Democrat
Trading Places →