So, the latest right-wing gimmick is that Egypt is going to turn into President Obama’s Iran, alluding to the horrendous foreign policy disaster of the Carter Presidency.

We’ve had “Obama’s Vietnam”, meaning of course the fact he had to get the country out of the mess Bush/Cheney got us all into. You remember? We invaded Afghanistan following the attack on 9-11, ostensibly to catch Osama Bin Laden. But the all seeing, all knowing, all wise Bush/Cheney duo decided it was best to sort of just put troops there, and leave them for six years holding the bag while they chased a squirrel into Iraq.

Then there was “Obama’s Waterloo”, multiple times, including Health Care and the BP Oil Spill.

And then we had “Obama’s Watergate”, which was the mythical Sestak scandal. This was the charge, which no doubt the GOP House will investigate, that the White House offered Sestak a job (a bribe according to right-wing talking bovines) not to run against SEN Specter in PA.

So, you’ll please pardon me while I yawn at the latest “this is Obama’s”, as in, Egypt being “Obama’s Iran”.

Is Palin an Idiot?

Yes Virginia, for the record, Palin is an idiot. 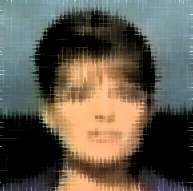 She was a mayor of tiny little one horse nothing town, which she left with a huge debt.

She was the Governor – until she quit under a very dark cloud of scandal for abuse of power – of Alaska for crying out loud!

She couldn’t name a single book, magazine, or newspaper she regularly read to keep up on things. Remember during the 2008 campaign when big bad Katie Couric “tripped her up”?

And speaking of Palin being an idiot, we don’t need to search any longer for evidence that John McCain wasn’t mentally fit to be President other than the fact he chose her for his running mate. She isn’t, in any way, Presidential, and if she’s an example of the “best” the GOP has to offer? On top of which, if she doesn’t get the nomination she’ll probably run as the Tea Party candidate, and that isn’t going to draw many votes from the left. But y’all go ahead and keep singing her praises, PLEASE.

The graphic artists at FOX PAC have moved the country of Egypt. Yes, it’s true. Egypt has been moved to where Iraq used to be. 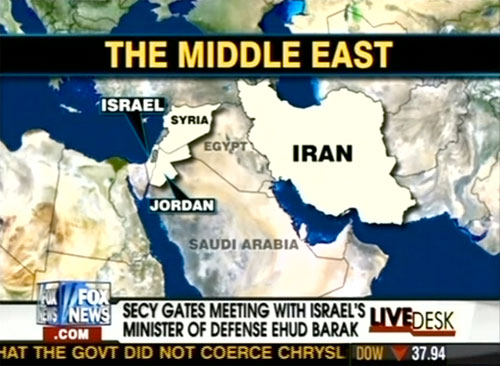 Such a move would have made it much easier for Moses, no Red Sea and all, and of course by moving Egypt into Iraq we don’t have to worry about that whole Iraq situation any longer.

Makes you wonder what else the News folks at FOX PAC have screwed up.

Sputnik Brought About Downfall of the USSR?

During an appearance Wednesday night on FOX PAC with fellow propagandist Greta Van Susteren, former Mayor/Governor/Losing VP Candidate Sarah Palin described the President’s State of the Union Address as full of “WTF moments”, once again demonstrating very clearly to anyone who has the ability to discern fact from fiction that she is not Presidential material. 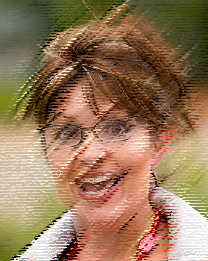 Of course, the biggest moment of showing just how truly ignorant she continues to be regarding not only politics, but especially history, came when Palin snarkily attacked the President for his reference to Sputnik.

“When he so often repeated this Sputnik moment that he would aspire Americans to celebrate. And he needs to remember that what happened back then with the former communist USSR and their victory in that race to space, yes, they won, but they also incurred so much debt at the time that it resulted in the inevitable collapse of the Soviet Union.”

Sputnik led to collapse of the Soviet Union?

Did you really say that?

Well, since Palin’s so fond of using today’s technology, let’s just Google “Sputnik” and see what we find.

Sorry, but checked over a hundred or so hits on Google, and the only ones claiming this are the ones showing her interview.

Ms. Palin has sadly proven, once again, first by her use of one of crudest phrases (“WTF”) just what kind of person she is; that, combined with her obvious lack of historical knowledge simply re-enforces what Kati Couric showed us in 2008; that she is in no way ready for prime time.

You Really Need that Many Rounds in Your Mag? 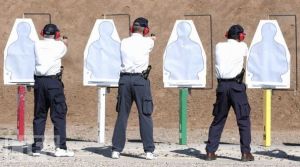 The Tea Party has reportedly held its first caucus. The three members failed to elect a chair however due to a tied vote 😉

The Huffington Post is reporting that former GOP Delaware Senate candidate Christine O’Donnell said she was “unimpressed” with President Obama’s State of the Union address, calling it “hypocritical” and accusing him of co-opting the Tea Party’s message of fiscal conservatism to push an agenda of bigger spending. 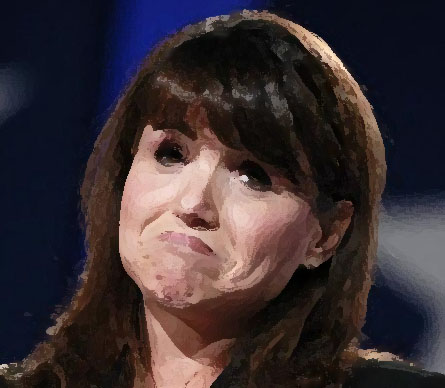 So, Christine, let me get this straight, you’re angry because the President is talking about cutting the deficit? And in so doing he is “co-opting the Tea Party’s message of fiscal conservatism”?

OK, well, for someone to “co-opt” your “message”, you have to have a message. Groups of angry, mostly old, white people screaming they want to “cut everything back to spending levels in 1789” isn’t much of a message.

Huffington reported that O’Donnell also said the speech was “hypocritical,” pointing to a number of the president’s goals, including his promise to eliminate wasteful programs while pushing for increased wireless internet access.

Interesting word choice of words for someone accused of illegally using campaign funds to buy dinner and pay rent. Hypocritical is probably not a word you should be using Christine, not unless you’re going to add, “And as someone who is a hypocrite, I know when I see someone else acting hypocritically”.

And how exactly is “pushing for increased wireless internet access” a “wasteful program”? I suppose you don’t have to worry about accessing the internet, but as the President outlined, there are thousands, if not tens of thousands, of rural Americans who do not have access, and by providing this service it will help farmers and ranchers access a previously untapped potential market. That’s what is known as “free enterprise”.

The Huffington article also related that O’Donnell seemed disappointed by the display of bipartisan unity shown by some members of Congress who decided to sit next to members of the other side of the aisle.

“I like when the Democrats sit on one side and the Republican sit on another,” O’Donnell said. “It’s supposed to be civil debate, you know, we’re not all supposed to braid each other’s hair and sing Kumbaya — not in Congress. Let’s have healthy debate and solve the country’s problems. I think something was missing last night with that whole prom date.”

Of course what she meant to say was, “Give me the good old days of Joe Wilson screaming angrily at the President, ‘YOU LIE!'”. Or, “I really like it when the members of the Congress beat each other up with canes and challenge each other to duels.”

Where have you been the past few weeks Christine? Was your coven on a retreat? Tucson? Congresswoman Giffords? Shooting? Sarah Palin’s lame excuse for why things like that happen?

What Ms. O’Donnell’s comments demonstrate is that like her mentor, Palin, she is uninformed, singularly obtuse in her opinions and not ready for the prime time.

Making a Difference in the Life of Our Nation?

OK, let’s get this out before Rush and the other conservative lemmings begin parroting each other like the sea gulls in “Finding Nemo”. When President Obama spoke last night during the State of the Union Address about people making a difference in the life of our nation by becoming teachers he wasn’t saying teachers should replace parents as the most important people in our children’s lives. And yes, I’m already hearing people “pointing out” how parents are more important, blaah, blaah, blaah …

First, some, it would seem, need to wake up to the fact that for far too many of our children in this country there are no adults who seem to give a flying fig what happens to them, and for many of them teachers fill that great big empty void.

And second, when was it ever bad for our children to have multiple good adult roll models in their lives?

Ready for the cuts? 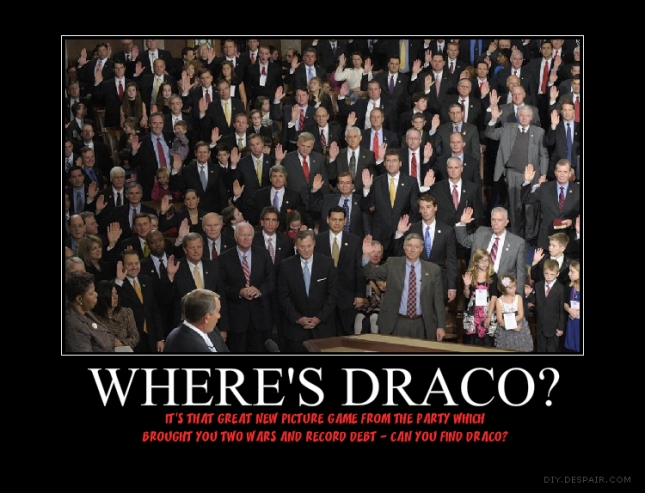 1 in every 100 Americans Believes Violent Action Should be Taken Against Government?

A new poll by Public Policy Polling reports 13 percent of Tea Party members say that violence against the current American government is justifiable. 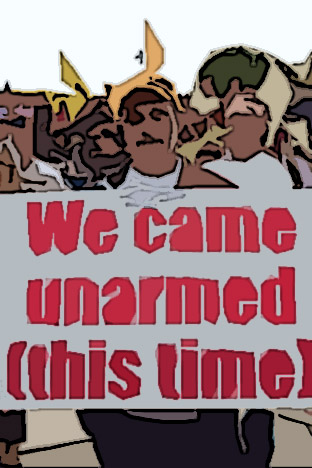 According to numerous sources (LA Times/CNN) there are approximately 22 million members of the Tea Party.

According to Nielsen ratings the daily viewing audience of FOX PAC is approximately 25 million viewers. Wow, who would have ever guessed those numbers would be so similar?

13% of 22 million is 2,860,000 right-wing crazies who think that violent action against our freely elected government is justifiable. Yeah, no big deal, only 3 million lunatics who want to fight a revolution against the government, probably all with high capacity – 31 round – magazines for their pistols; but it’s OK, don’t let the violent rhetoric worry you.

‎So, basically, 1 in every 100 people you see could be a potential right-wing extremist thinking – at any given moment – they should take violent action against the United States Government; but, like I said, no big deal.