It’s a miracle the GOP could actually be shamed into doing something it should have gone along with from the start.

But, an even bigger Christmas ‘miracle’, occurred when FOX PAC commentator Shepherd Smith stood up to point out just how wrong the GOP Senate was, asking, “How do they sleep at night?”

As commendable – and historic – as a FOX PAC commentator demonstrating they’re not all brainless automatons, Smith wasn’t alone (except at FOX PAC) in attacking the soulless Senators of the GOP. While he was putting pressure on the Republicans from within its inner circle, it was Comedy Central’s Jon Stewart who made them all look like the arrogant smucks they really are. 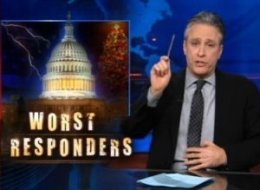 Stewart referred to the GOP Senate members as “the Worst Responders”, sarcastically lauding their success in blocking the 9-11 legislation while passing a continuation of the Bush Tax cuts for everyone, especially the top 2% of Americans.

“Yes!” Stewart exclaimed. “That is astoundingly good news for firefighters who make over $200,000 a year.”

Stewart didn’t just attack the GOP Senate for its opposition however, he also attacked all the news networks, pointing out how none of them – with the exception of Smith’s comments – were airing this story. Well, all except for Al Jazeera.

“Our networks were scooped with a sympathetic Zadroga Bill story by the same network Osama bin Laden sends his mix-tapes to!” a clearly frustrated Stewart said. “This is insane!”

And it was insane! What other word fits to describe the actions of the GOP Senate? For nearly a decade the GOP has made 9-11 it’s personal political rallying cry, waving it around like a bloodied flag. With it’s unconscionable delaying of benefits however, it has forfeited its right to ever evoke that sacred cash cow again. It is one more example of how hypocritical the GOP really is, and voters need to remember this in two years.

Every GOP Senator who opposed this bill needs to be heavily campaigned against in their next election. They need to be sent packing for this one shameful action alone.

It’s Disrespectful to Christmas to Ratify an Arms Treaty?

Who knew that ratifying an arms treaty was disrespectful to a holiday dedicated to ‘peace on earth’ and ‘goodwill towards men’?

All the top brass supports the ratification of the new START Treaty, as do all the six living former Secretaries of State. Who opposes it? The GOP Senate. The same group of petulant whiners who oppose the Defense Authorization Act – funding for our troops fighting and dying in Afghanistan and Iraq – and the 9-11 Responders Act – you remember them? The men and women who sacrificed so valiantly to save others on that day, and following days and weeks.

“The fact that we’re doing this under the cover of Christmas,” whined Sen. Jim DeMint (P-S.C.), “is something to be outraged about.”

Here’s something to be outraged about you bone head! Troops are serving overseas this holiday season, and some may be wounded, and others might die on Christmas, because morons like you – who never had the guts to put on the uniform – put them there. Shut up, and get to work, and spare us your right-wing hypocritical religious nonsense. You stood in the halls of the Senate and voted no to everything for two years, and now you’ll have to work. Call whine one one.

And the whining continues with the so-called leader of this group of sniveling, weeping legislators, Sen. Jon Kyl (P-Ariz.), going on record saying the Democrats’ legislative agenda amounts to ‘disrespecting one of the two holiest of holidays for Christians.'”

You too Senator “I couldn’t be bothered to ever serve my country”. SHUT UP, QUIT YOUR WHINING! GET TO WORK!

What could be more respectful at Christmas than for you bunch to pull your collective heads out of your fourth points of contact and ratify a treaty reducing nuclear weapons. Ever heard of “Peace on Earth”?

Of course guys like DeMint have cried out, “We haven’t had enough time to read this and study it out.” You’ve only had eight months Senator Hypocrit. That’s all, just eight short months. SHUT UP AND GET IT DONE!

Posted by PEB on December 22, 2010 in Arms Control, Military, Politics

When he took to the floor of the United States Senate shortly before the historical vote to end the military’s “Don’t Ask/Don’t Tell” policy, SEN John McCain cried out in anger, “Today is a very sad day,” and announced, “There will be high-fives over all the liberal bastions of America,” from “the elite schools that bar military recruiters from campus” to “the salons of Georgetown.”

As someone who has served for more than 20 years, having moved from the ranks through company commander, this is not a “very sad day”, it is a day long over due. Whether you support the homosexual/lesbian lifestyle or not, this has been a disastrous policy which has hurt – not helped – our military. Millions of dollars have been spent to train troops and then to discharge them. Discharge them, not because they’re wounded or can’t perform their duties, but because they’re gay. How does that make any sense, fiscal or otherwise?

Those – including McCain –  opposed to the decision have been using, and continue to use, the same tired arguments espoused before desegregation of the military. They claim that it will cost the military recruiting numbers, that straight young men and women will not join now because they’ll be serving with “those people”. Some right-wing gas bags like Rush Limbaugh have claimed it will be necessary to reinstate the draft to fill quotas. Of course Rush also claimed the President was taking over the car industry.

Face it Senator, and everyone else who is afraid some “homo” will be scoping you out, there have been gays and lesbians, serving, fighting, bleeding and dying for as long as we’ve had armed forces. This is not the end of the military, nor is the beginning of the end of the republic.

When confronted with the impossible solution of how to deal with millions of illegal aliens President Reagan waved his magic pen and pardoned them.

When confronted with the impossible solution of how to deal with millions of illegal aliens President Obama has put forward the Dream Act requiring children of illegal aliens to obtain a college degree or perform service to the country before being allowed to obtain citizenship.

Now, I ask you, who is more conservative?

Yes Virginia, it’s true. There is a Santa Claus, and the Republican Tea Party (GOTP) knows no bounds when it comes to parading its hypocrisy for all the world to see.

All 47 GOP Senators have voted not to extend benefits for 9-11 First Responders.

SEN Mike Enzi of Wyoming defended his vote by saying, “The nation can’t afford careless spending, no matter how well intentioned,” following that up with, “…it would be irresponsible to give them more.”

Let me get this straight. It is “irresponsible” and “careless spending” to give an additional $7.4 billion to help take care of those who risked their lives to rush to help others trapped in the rubble of 9-11, but it’s OK to extend the Bush tax cuts – adding an additional $700 BILLION to the deficit – to the wealthiest 2% of Americans?

As Daily Show’s Jon Stewart put it, “You know what republicans? You use it so much (9-11 imagery) if you don’t owe the 9/11 responders health care, at least you owe them royalties.”

The days when any GOP candidate, or office holder, could cash in on how much deeper they understood the heroism, tragedy and repercussions of 9-11 are now over. Do not ever go there again!

Darned activist judges legislating from the bench … with his ties to the conservative group “Campaign Solutions” which ran campaigns for Boehner, the GOP Attorney General of VA and other GOP candidates, all of whom campaigned on repealing the health care law, the Judge should have recused himself from the case …

One more case of blatant GOP hypocrisy; they yell and scream about judges legislating from the bench, unless of course they rule in their favor.

Posted by PEB on December 14, 2010 in Courts, Health Care, Politics

Day #40 of GOP Control of the House