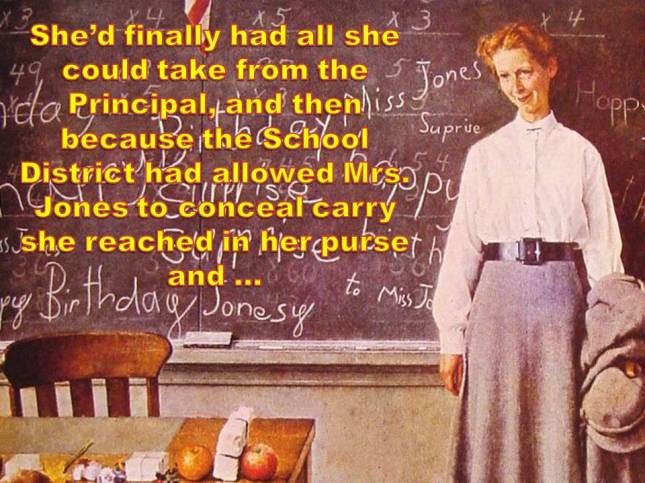 Just one reason why arming teachers could be a potentially really bad idea.

Violence in the work place + workplace filled with kids = catastrophe

Lindsey Graham claims Secretary of State Hillary Clinton ‘Got Away With Murder’?

According to news reports, Republican Tea Party (GOTP) Senator Lindsey Graham of South Carolina’s claiming outgoing Secretary of State Hillary Clinton “got away with murder” in the Benghazi attack that killed Ambassador Chris Stevens and three other Americans.

Well Senator, how about this? Perhaps if the uber-conservative GOTP members of the House hadn’t slashed funding for embassy defenses the four Americans would still be alive? The hypocrisy of the right knows no bounds, it’s amazing how this attack’s somehow criminally negligent but the death of more than 3,000 Americans on 9-11, and then sending more than 4,000 American soldiers to their deaths on faulty intelligence wasn’t? So, using Graham’s logic then, the Bush Administration got away not with murder, but with “mass murder”.

How Offensive Can One Person Be?

According to news reports, an incredibly obtuse Republican lawmaker in New Mexico has introduced a bill legally requiring rape victims to carry their pregnancies to term in order to use the fetus as evidence for a sexual assault trial.

House Bill 206, is the brain child of state Rep. Cathrynn Brown (R), and would charge a rape victim who ended her pregnancy with a third-degree felony for “tampering with evidence.”

“Tampering with evidence shall include procuring or facilitating an abortion, or compelling or coercing another to obtain an abortion, of a fetus that is the result of criminal sexual penetration or incest with the intent to destroy evidence of the crime,” the bill says, and third-degree felonies in New Mexico carry a sentence of up to three years in prison.

The bill’s unlikely to pass though since Democrats have a majority in both chambers of New Mexico’s state legislature.

Brown claims she introduced the bill with the goal of punishing the person who commits incest or rape and then obtains or facilitates an abortion to destroy the evidence of the crime.

Really, the baby’s going to be the only evidence of the rape? How about a rape kit used collect DNA evidence? Are you really this ignorant? Are you this arrogant?

“New Mexico needs to strengthen its laws to deter sex offenders,” said Brown. “By adding this law in New Mexico, we can help to protect women across our state.”

Wow, Republican Tea Party (GOTP) types have used tortured logic before in order to inflict additional harm upon rape victims – enforced vaginal probes, trying to define “legitimate” rape as well as claiming a woman’s body can prevent a pregnancy if she’s raped – but none has gone this far. Brown appears to be another unthinking right-wing zealot who will do whatever she can to impose her views; she serves as a member of the board of Carlsbad’s Right to Life chapter, and she’s also fond of posting pictures to her Facebook page from the Life’s Issues Institute such as the following:

Brown’s now attempting to backtrack claiming the bill, as introduced, was a misprint. Wanting to charge a rape victim with a third degree felony if she gets an abortion isn’t misprinting Representative, it’s a deliberate attempt to force your myopic Christianity upon everyone else. Thank God the Constitution provides for a separation of Church and State to protect my daughters and granddaughters, my nieces and friends from the likes of good god-fearing Christians like you. 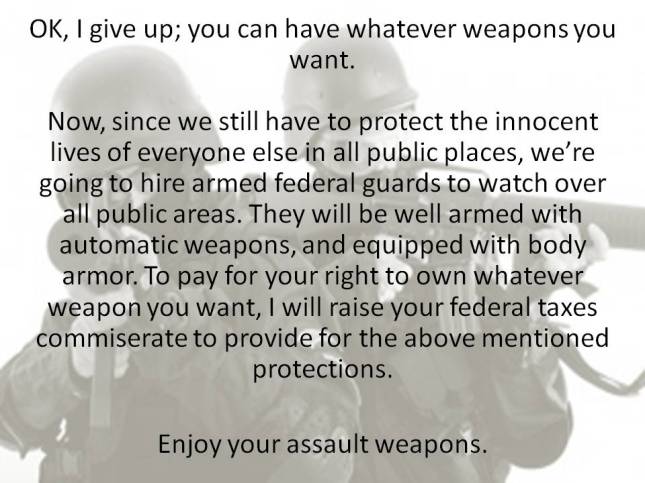 A “man” in Hermiston, OR’s driving around in his “truck” toting a sign with the spray-painted words, “Lee Harvey Oswald where are you when we need u” claiming he doesn’t want someone to assassinate the president. 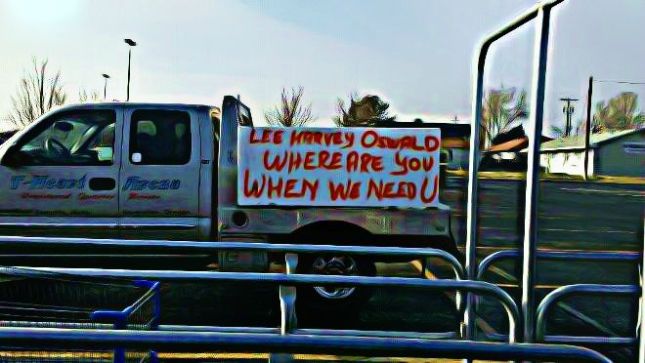 According to local television news the man who drives the truck would only identify himself as “Chuck,” and didn’t want to go on camera or have his voice recorded.

While the sign would seem to imply a call for assassination, “Chuck” denies this, saying he doesn’t want President Obama to be shot, he just wants him “removed” and believes the President “caused” the shooting at Sandy Hook Elementary, and that his sign’s only a means of protecting our First and Second Amendment rights.

So, his talk of “protecting our First and Second Amendment rights” means “Chuck’s” no doubt a member of the Tea Party and he wants the President to be “removed” but not assassinated, but can’t be bothered to paint a sign reading, “Archibald Cox where are you when we need U”?

“Chuck” needs to be questioned and questioned thoroughly by the United States Secret Service, and a whole team of doctors. And here’s a pointer for you “Chuck”, just because the First Amendment gives you the right to paint a sign doesn’t mean you should paint it.

According to FOX News there’s a little hick Texas school district bragging about how it may just be may be the very first in these darned blamed United States to pass a law allowing Schoolmarms and staff to tote shooting irons to school. 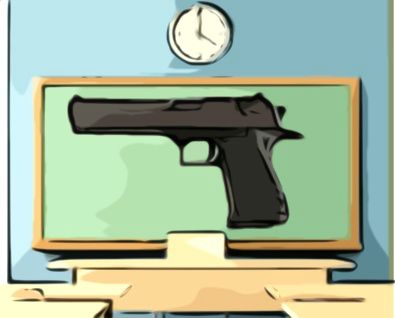 Who are these lame brains you ask? Well, they’re the so-called Trustees at the Harrold Independent School District and they approved a district policy change last October so employees can carry concealed firearms to deter and protect against school shootings, provided the teachers follow certain requirements.

Superintendent David Thweatt said the policy was initiated because of safety concerns.

“We have had employees assaulted before by people in the last several years,” Thweatt said. “I think that safety is big concern. We are seeing a lot of anger in society.”

But hold on thar now partner, don’t get your knickers all knotted up, in order for teachers and such to carry a pistol, they must:

Thweatt said the small community is too far from the sheriff’s office (30 minutes), leaving students and teachers without protection. He said the district’s lone campus sits 500 feet from heavily trafficked U.S. 287, which could make it a target.

Well here’s an idea Cletus, hire an armed school police officer or two; it’s a lot safer than arming teachers, secretaries, janitors, and lunch ladies, and you won’t have the chance of a teacher losing their cool with a class or a student and start waving their piece around. In more than ten years of teaching, and having worked with hundreds of teachers, there are maybe five I’d trust with a gun in school.

“The naysayers think [a shooting] won’t happen here,” Thweatt said. “If something were to happen here, I’d much rather be calling a parent to tell them that their child is OK because we were able to protect them.”

You can almost hear Thweatt’s next bright idea, “Next year we’re going to install minefields around the school and require staff and students to wear tin foil hats, because if the Ruskies or Koreans attack they’ll get caught up in the mines, and then the staff can mow them down, and well, the tin foil will prevent the space aliens from reading our minds.”