Romney Says Students Should Get ‘As Much Education As They Can Afford’?

According to news reports, Republican Tea Party (GOTP) presidential wanna-be Willard Mitt Romney has given some advice to future students while campaigning in Virginia.

“I think this is a land of opportunity for every single person, every single citizen of this great nation. And I want to make sure that we keep America a place of opportunity, where everyone has a fair shot. They get as much education as they can afford and with their time they’re able to get and if they have a willingness to work hard and the right values, they ought to be able to provide for their family and have a shot of realizing their dreams.”

The statement, “get as much education as they can afford” is no big shock coming from a rich kid whose biggest financial challenge while going to college was having to divest some of his stock portfolio while roughing it in a 3,000 + SF apartment. Willard’s other sage advice to students has been to “take risks” and even borrow money from their parents to fuel success.

This appears to be just another, “Let them eat cake” moment for the struggling GOTP candidate, who’s had a dismal time showing he’s in touch with middle and lower class Americans. “Get as much education as they can afford” smacks of elitism and begs the question, “So, only rich kids should go to college”? Maybe only rich kids who keep their hair cut short?

Well, wonder of wonders, the Republican Tea Party (GOTP) dominated House buckled under and approved legislation preserving jobs on transportation projects from coast to coast and avoiding interest rate increases on new loans to millions of college students. The bill, which then sailed through the Democratic controlled Senate (for once with no threats of GOTP filibusters), was then sent for the President’s signature. 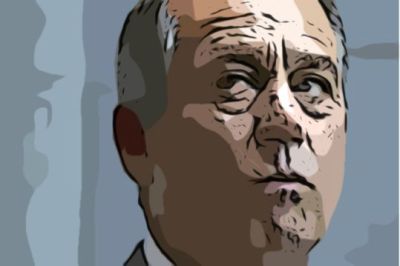 With the bill’s passage, just over $100 billion can now be spent on highway, mass transit and other transportation programs over the next two years, projects that would’ve expired Saturday without congressional action; it also ends the stalemate over student loans.

Under the bill, interest rates of 3.4 percent for subsidized Stafford loans for undergraduates will continue for another year, had the uber-right Tea Party members had their way, interest rates would have mushroomed to 6.8 percent for 7.4 million students expected to get the loans over the coming year, adding an extra $1,000 to the average cost of each loan.

The Democratic-led Senate passed the measure by a 74-19 vote, after the GOTP-run House approved it 373-52; with all the no votes – of course – being cast by the uber-right conservative members of the Congress.

The final version of the transportation measure dropped a provision – which had drawn a Presidential veto threat – that would have forced government approval of the controversial Keystone XL oil pipeline from Canada to the Texas coast.

According to the Associated Press (AP), White House spokesman Jay Carney said the administration was glad Congress acted “before middle class families pay the price for inaction.” He said President Obama will keep pressing for approval of more of his job-creating proposals from last year, to hire teachers, police officers and firefighters and for tax credits to companies that hire new workers.

Financing for most of the measure came from extending federal taxes on gasoline and diesel fuel for an additional two years which levies, unchanged for nearly two decades, are 18.4 cents a gallon for gasoline and 24.4 cents for diesel and which fall woefully short of fully financing the highway programs they were designed to do.

About $20 billion would be raised over the next decade by reducing tax deductions for companies’ pension contributions and increasing the fees they pay to federally insure their pension plans. In return, a formula was changed to, in effect; let companies apportion less money for their pensions and to provide less year-to-year variation in those amounts.

Additional revenues will be raised by charging interest on subsidized Stafford loans no more than six years after undergraduates begin their studies.

A loophole was also tightened making it harder for businesses with roll-your-own cigarette machines to classify the tobacco they sell as pipe tobacco – which is taxed at a lower rate than cigarette tobacco. The change is expected to raise nearly $100 million.

It also steers 80 percent of the billions in Clean Water Act penalties paid by BP and others for the 2010 Deepwater Horizon oil rig explosion to the five Gulf States whose beaches and waters were soiled by the disaster. The money would have otherwise gone to federal coffers.

Federal timber subsidies worth $346 million would be distributed for another year to rural counties, while other funds would be steered to rural school districts.

No matter how this is sliced it’s a victory for the President and a loss for the GOTP, particularly for the uber-right Tea Party; it’s one more victory in a week of victories which saw the Supreme Court’s overturning of the most controversial parts of Arizona’s papers please bill and the upholding of the Affordable Care Act. Try though they might, spinning this beyond their own will be extremely difficult.

Down to 19 weeks to go until the November election and Republican Tea Party (GOTP) “it’s my turn” bully-boy Willard Mitt Romney’s staff has been conducting “meetings” in dance clubs with bars serving champagne in uni-sex bathrooms, while Willard’s been forced to flip, flop and soften his staff on immigration following the Supreme Court decision to toss out the controversial sections of Arizona’s heinous anti-immigration law coupled with President’s announcement allowing children brought into this country illegally by their parents to be able to stay.

Still no new polls showing favorability of the candidates, but the last Bloomberg poll of voters conducted from 15-18 Jun 12, shows the President with a 55% favorability rating compared to Romney’s 39%.

In the most recent viable’ poll(s) – which are any group other than FOX News or Rasmussen (which are always skewed to the right) – the most current NBC News/Wall St. Jrnl poll of registered voters conducted 20-24 Jun 12, if the general election were held today:

The most recent Gallup Tracking poll of registered voters conducted 20-26 Jun 12, if the general election were held today:

And finally, the most recent Bloomberg poll of likely voters conducted 15-18 Jun 12, if the general election were held today:

How big would Willard lose? Well, if the General Election were held today, the Electoral College totals based on all available current poll numbers: 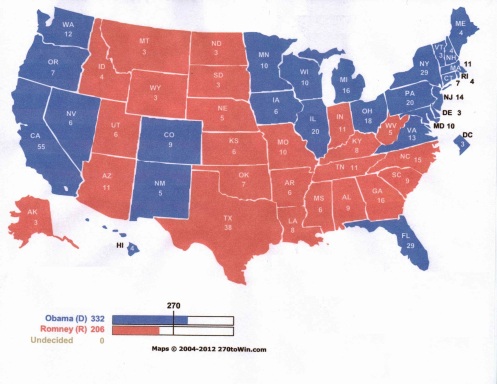 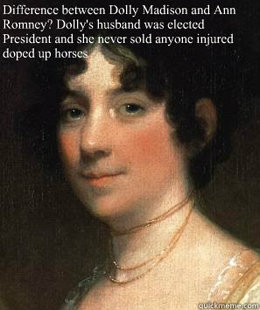 ← Older posts
The Liberty Tree
Create a free website or blog at WordPress.com.