Kyl says he’s going to takes his toys with him? 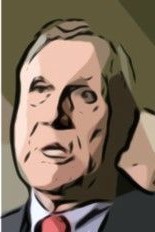 Senator Jon Kyl, a Republican Tea Party (GOTP) member of the so-called “super committee” deficit-reduction panel in Congress has said he would quit the panel if new defense spending cuts are considered.

Well, gee Jon, thanks for playing, don’t let the door hit you on the way out. So, defense spending is the sacred cow? We’re going to continue to fund the defense department at the same – if not higher – levels than we have during the past decade since 9-11? Earth to Jon, we got Bin Laden; we can bring everyone home now.

Of course Kyl made his threat in a conservative group hug sponsored by the uber-conservative think tanks Heritage Foundation and the American Enterprise Institute. He spoke to the groupies a short time after the uber-committee held its first meeting; the same uber-committee which has been tasked by Congress and the White House to find $1.2 trillion in new government savings over the next 10 years.

“I’m off of the committee if we’re going to talk about further defense spending,” Kyl said he has told super committee colleagues.

Once again, see ya Jon! So, you won’t cut defense spending, and you won’t raise taxes? Guess you’re OK though with cutting the guts out of Medicare, Medicaid and Social Security though huh? It’s OK to throw Grandma under the treads of the tanks? Once again, we got the Boogey Man; we can stand down, and prepare for the next war. That’s what you do when the fighting’s over. Or perhaps you’ve forgotten that the deal struck to create this committee requires $350 billion in security program cuts, which – by-the-way Jon – includes defense spending? Or perhaps you’ve forgotten that if the uber-committee fails to come to a deal on at least $1.2 trillion in additional savings, automatic spending cuts would be triggered starting in 2013. Those cuts would be split evenly between domestic programs and defense?

This is the new GOTP, slash and burn social spending, cut aid to our own people, including veteran’s benefits and school programs, but don’t you dare cut anything out of the defense department’s budget; we need that money to keep the conservative sugar daddy, the military-industrial complex, humming. Please Senator shut your pie hole before you embarrass yourself any further, and please by all means quit the uber-committee. Oh, and by-the-by, your retirement can’t come soon enough.

Posted by PEB on September 8, 2011 in Federal Budget