Romney lied to Cadets at The Citadel? 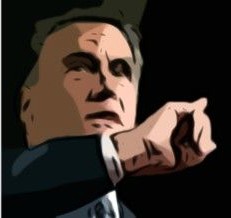 According to the Associated Press (AP) Republican Tea Party (GOTP) presidential candidate Willard Mitt Romney promised in his first major foreign policy speech to reverse “massive defense cuts” that haven’t happened, and he pledged to deploy missiles and ships that already are in place.

The AP reported Romney pledged, “As president, on day one, I will focus on rebuilding America’s economy and I will reverse President Obama’s massive defense cuts. Time and again, we have seen that attempts to balance the budget by weakening our military only lead to a far higher price, not only in treasure, but in blood.” Mittens also has vowed to increase the size of the military by 100,000 troops, a move he says is needed to reduce the hardship of long and frequent deployments.

Unfortunately for Romney there have been no “massive defense cuts” under President Obama, although he has slowed the “projected” rate of increase and in April asked the Pentagon to identify an additional $400 billion in reductions over the next 12 years, he hasn’t “cut” a single penny from defense spending.

When President Obama was sworn in, the defense budget was $513 billion, not counting $153 billion to pay for the wars in Iraq and Afghanistan. For the budget year that ended 30 Sep 11, the figure was $530 billion, with an additional $159 billion to pay for the wars. So, as anyone can plainly see, there has been an increase in defense spending under President Obama, not some imaginary “cuts”; and for the current fiscal year (FY 12), the President has requested $553 billion for the defense budget, exclusive of war costs. But in a deal worked out by Congress and the White House as part of a deficit-reduction plan in August, he was forced to come down to $513 billion – I hope everyone was paying attention to who wanted to spend $553 billion and who forced it to go down to $513 billion; in case you missed it, it would be the Republican Tea Party controlled Congress – meaning the House of Representatives – who as any fifth grader knows, controls the federal purse strings.

So, Mittens could – I suppose – if he’s elected, force the GOTP controlled House to stop cutting defense; but to claim its President Obama is either to do so deliberately, as in a lie, or out of ignorance for the facts. Since Romney is not ignorant, it must be a deliberate lie.

As for troop numbers, the AP reported President Obama’s previous defense secretary, Robert Gates, put the Army and Marine Corps on a path to reducing troop numbers to adjust to the winding down of combat in Iraq and plans to reduce troops in Afghanistan. The Army is to drop from its current 569,000 to 547,000 by September 2013, and then to 520,000 by 2015. The Marines are to drop from 202,000 to a figure yet to be specified but in the neighborhood of 186,000 by 2015, the Marine Corps – not he President – has been advocating cuts to its size; traditionally it numbers around 175,000, and was only bumped up to its current size of 202,000 to address its long “Army-like” missions in Iraq and Afghanistan. And, by-the-by, when you end wars, you scale back on the number of troops, planes, ships, tanks, etc … just thought I’d mention that.

To add 100,000 soldiers to current troop strengths would be not just expensive, but very expensive and it’s not even remotely clear from Romney’s remarks what they would do, or how he would pay for them especially since he’s part of the “let’s not raise taxes” choir. Oh wait, I know, we’ll just cut Medicare, Medicaid and Social Security, and with 100,000 new troops we can, wait for it, invade Iran!

Mittens also pledged that within his first 100 days in office, he’d “reverse the hollowing of our Navy and announce an initiative to increase the shipbuilding rate from nine per year to 15. I will begin reversing Obama-era cuts to national missile defense and prioritize the full deployment of a multilayered national ballistic missile defense system. … I will enhance our deterrent against the Iranian regime by ordering the regular presence of aircraft carrier task forces, one in the Eastern Mediterranean and one in the Persian Gulf region.”

Once again, Romney’s view of reality doesn’t measure up; the total number of ships in the Navy has been declining steadily since the 1980s. With the demise of the Soviet Union, the need for large numbers of warships has not been a priority when the military has been fighting small-scale wars with minimal combat at sea. Dating back well into the Bush/Cheney era the Navy has said it needs a minimum of 313 ships to perform its missions. It now has 284 ships, up from a low of 278 in 2007. Hold on now, that’s an increase from the previous President?

Despite Romney’s inference, there’s a full-time carrier presence in the Persian Gulf and has been pretty much since Desert Storm, but while there’s no full-time presence in the Mediterranean, carriers are frequently there for deployments in the Middle East.

So, let’s see; there’s been an increase in ships since President Obama took office; and we’ve had a commanding carrier presence in the Persian Gulf – that would be the area Iran uses incidentally – another couple of lie perhaps, or is Mittens ignorant of foreign affairs, in spite of trying to portray himself otherwise?

On the topic of national missile defense; Earth to Mittens, it’s already deployed and is being expanded, not cut. There are 30 ground-based interceptors based in Alaska and California, along with a network of radars and command and control stations to operate it. Additionally, there are 24 Navy Aegis ships with a missile defense capability already in service.

Mittens is clearly mistaken in all his assertions; the question now is, was he lying, or his he that woefully ignorant on national defense issues; unfortunately, I think it’s the former; it appears he’s deliberately trying to mislead voters; it’s bad enough to lie, worse yet is to lie about the Commander-in-Chief at a Military School in front of Cadets who will one day serve.