Democratic Congressman Bobby Rush of Illinois was reportedly removed from the House floor after wearing a “hoodie” and sunglasses in protest of the Trayvon Martin shooting in Florida. 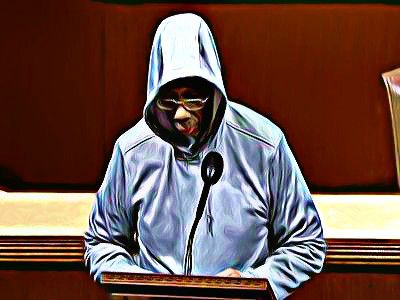 “Racial profiling has to stop,” Congressman Rush said as he peeled off his suit jacket to reveal a hoodie underneath, at which point he pulled the hood over his head and replaced his glasses with sunglasses. “Just because someone wears a hoodie does not make them a hoodlum.”

The Congressman then began citing passages from the Bible about the need “to do justly and to love mercy and to walk humbly with your God” and about being “sent … to proclaim freedom for the prisoners and to recover the sight to the blind and to set the oppressed free …. I urge all men who hear these words to heed these lessons.”

Republican Tea Party Congressman Gregg Harper of Mississippi, who was presiding over the chamber at the moment, repeatedly hammered the gavel and tried to interrupt Rush, but he kept talking with a louder voice.

“May God bless Trayvon Martin’s soul, his family,” Congressman Rush shouted. He was still yelling as he was escorted off the floor by the House Sergeant at Arms.

Harper said Rush was removed for having violated House rules by wearing a hoodie and then felt the need to remind those in the chamber of the rules.

“Clause 5 of Rule 17 prohibits the wearing of hats in the chamber when the House is in session,” Harper said after Rush had been taken out. “The chair finds that the donning of a hood is not consistent with this rule. Members need to remove their hoods or leave the floor.”

Congressman Rush made a clear statement that the clothes do not “make the man”, while Harper demonstrated something entirely different. The entire Democratic Caucus needs to show up on the floor of the House in hoodies and sun glasses, and force someone like Harper to have hundreds of members of Congress escorted from the floor.