And then there was one; and two other guys 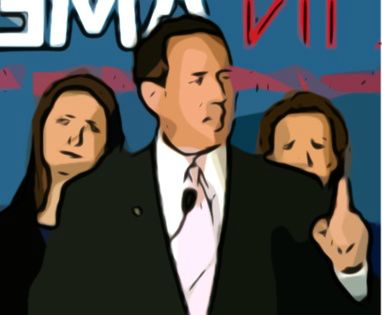 So, why is Ricky dropping out? Has he come to the conclusion – finally – that it truly was over, that there was no way he was going to pull this thing out? Or, has he been offered something from Willard’s camp for his withdrawal? As much as I would hope it’s the latter it’s more than likely the former. The odds were not in his favor – in any way, shape or form – and current polling showed he was falling not just behind, but further and further behind Romney in his home state of Pennsylvania.

With Santorum gone Romney’s home free as there’s next to absolutely no chance Santorum’s followers are suddenly going to rally to either Newton Leroy Gingrich or to Uncle Paul’s banners, and even if they did so, they’d still lose; Gingrich’s campaign is bankrupt and Paul’s never left the tarmac.

It’s all over; move along citizens, nothing left to see here.

← O’Donnell criticizes Romney’s faith?
Allen West’s ‘heard’ there are 80 commies in the Congress? →