For those who will insist on continuing to use the “Hitler” reference in their argument to allow American citizens to own whatever gun they desire, or that the Founding Fathers meant for the Second Amendment to change with the times.

First, way to use the already debunked right-wing Hitler reference; one can only hope you’d know he never made any speech in 1935, or any other year where he said, “This year will go down in history! For the first time, a civilized nation has full gun registration! Our streets will be safer, our police more efficient, and the world will follow our lead into the future!”

Second, the truth is no gun law was passed in Germany in 1935. There was no need for one, since a gun registration program was already in effect in Germany; it was enacted in 1928, during the Weimar Republic, five years before Hitler’s ascendancy.  But that law didn’t “outlaw” guns, it restricted their possession to individuals who were considered law-abiding citizens, and who had a reason to own one. And there’s no reason to consider that law particularly significant, either since the NAZIs didn’t seize control of their own country at the point of a bayonet, they used a much more potent weapon: propaganda. One can also hope you’d realize that no matter how well-armed German Jewry might have been it wouldn’t have been able to resist the military might of the Third Reich. Many did try and were murdered anyway. It’s the same lunatic thinking that some new wonderful band of “patriots” is going to stand up to the United States military and “take back the guvmint”.

Third, the Second Amendment was to make possible the defense of the colonies as a whole through providing for a “well regulated” militia; meaning all the “able-bodied” men would be prepared when called up, with the same caliber musket, as well as sufficient quantities of powder and ball. The Founders never intended a large standing army as Britain had been able to use in its attempt to control the colonies, thinking it the basis of tyranny. Men like Washington and Adams intended the new nation would have a very small standing army and in time of war the “citizen soldier” would be called upon to swell its ranks. It was not put into place to provide the “common man” the ability to overthrow the government, nor to be able to defend his home against marauding zombies. It also wasn’t put into place to provide the “common man” with the ability to hunt since Founders couldn’t care less who had a “squirrel gun” or a hunting rifle, it was a given you’d have the right to hunt and to provide food for your family.

You want your assault rifle and high capacity magazine to have a revolution – fine, have it. But stop threatening it and do it, that way me and millions of others like me will be able to fulfill our oath and “protect and defend” our Constitution against the “domestic” enemy the right-wing fringe has become. If you’re going to have your revolution please start and let the rest of us move on in this much needed change of gun fantasy in this nation.

So Rush Limbaugh has now decided that President Obama is Adolf Hitler, and that the proof is that his health care plan symbol resembles the Nazi Eagle emblem from World War II.

Ok, well, um, each has wings…and each has a circle…

Does anyone else have a problem with Rush, Hannity, et al., trying to compare the current administration to Hitler’s Nazi regime?

One very learned group certainly does. The Simon Wiesenthal Center is criticizing those who have injected Adolf Hitler into the discussion of President Obama’s health care plan. That would be? Let’s see? Oh, yeah, Rush, Hannity, et al., and a whole host of thug-like troglodytes hell bent on disrupting the free discourse of political thought and discussion. Gee, just like the brown shirted thugs of the Nazi Party did in Germany during the 1930s. So, who are the Nazis here?

“It is prepostrous to try and make a connection between the President’s health care logo and the Nazi Party symbol, the Reichsadler” said Rabbi Marvin Hier, founder and dean of the Simon Wiesenthal Center.

The Simon Wiesenthal Center is one of the largest international Jewish human rights organizations with over 400,000 member families in the United States. It is an NGO at international agencies including the United Nations, UNESCO, the OSCE, the OAS, the Council of Europe and the Latin American Parliament.

Now Rush, for the sake of your logical argument, let’s take a look at other symbols in the United States and used by the government that might, just might, look a little more like the Nazi Eagle.

And then this symbol looks a lot like the Luftwaffe symbol of World War II. 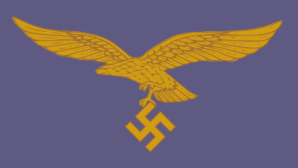 There are a lot more symbols that could be thrown out as resembling something “evil”, just as Rush has done. Perhaps people should stop and think before comparing things to the symbols of the Nazi Party.

But then again asking Rush, Hannity, et al. to stop and think might be asking too much.