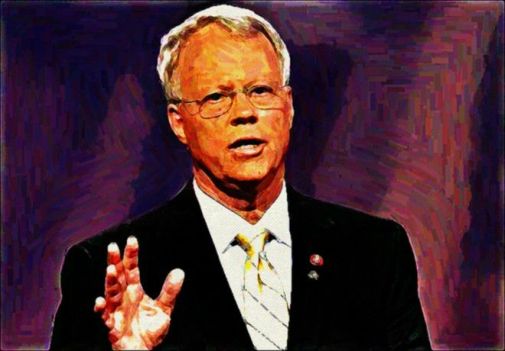 Reportedly in videotaped remarks made before a church group (evidently the Church of the Blessed Lunatics), the so-called “Congressman” and “Doctor” said all he’d been taught about evolution and embryology and the Big Bang theory “all lies straight from the pit of Hell,” adding that the lies were intended to “keep me and all the folks who were taught that from understanding that they need a savior.”

While there were a few “amen’s” in his audience, well known TV science guy, Bill Nye was not impressed with the “Congressman’s” views, especially since Broun’s the chairman of the U.S. House of Representatives Committee on Science, Space, and Technology.

“Since the economic future of the United States depends on our tradition of technological innovation, Representative Broun’s views are not in the national interest,” Nye told The Huffington Post in an email. “For example, the Earth is simply not 9,000 years old,” he continued, contradicting a remark made by Broun later in the video. “He is, by any measure, unqualified to make decisions about science, space, and technology.”

That’s right, this esteemed member of Congress, a medical doctor no less, claims the earth’s only 9,000 years old – I’m sorry but anyone who believes that nonsense is a dolt, and since Broun’s proclaiming it, he’s clearly the king of the dolts, and as Nye says, has no business serving on the committee overlooking decisions on funding science and technology. Maybe he should be serving on the Committee on Idiocy, Moronic Views and Harebrained Opinions? And yet, this is the face of today’s Republican Tea Party – enjoy.

Posted by PEB on October 8, 2012 in Congress, Right Wing Crazies