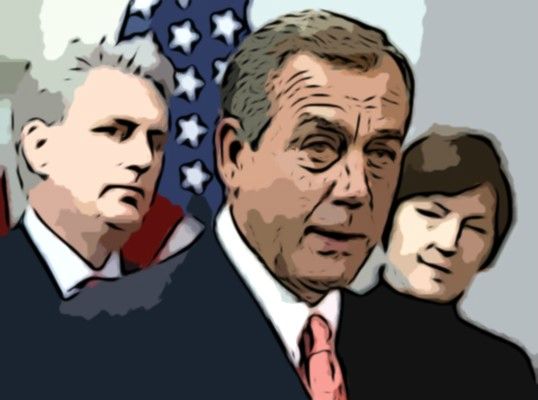 The Editorial began recounting how GOTP Senate leader Mitch McConnell “famously said a year ago his main task in the 112th Congress was to make sure President Obama would not be re-elected. Given how he and House Speaker John Boehner have handled the payroll tax debate, we wonder if they might end up re-electing the President before the 2012 campaign even begins in earnest.”

Earlier this week GOTP House members killed the two-month extension of the payroll tax cut, unemployment benefits and a provision avoiding Medicare payment cuts to doctors by a 229-193 vote. The Senate had voted by an 89-10 margin to extend all three for two months. All three provisions expire on 1 Jan 12. GOTP House members want the Senate to return and negotiate over a compromise plan but Democratic Senate Majority Leader Harry Reid said he won’t negotiate until the House approves the Senate’s package.

Finally Senator Reid has shown some back bone against the Tea Party conservatives across the aisle; what’s even better about this situation is McConnell had clearly struck a deal with Reid, and Boehner has to have been part of it as well but then his Tea Party compatriots cut his knees out from under him led by Eric Cantor.

The conservative editorial board wrote that the GOTP has “thoroughly botched the politics.” The board also added that Obama’s in a “stronger re-election position today than he was a year ago.”

After 1 Jan 12, the payroll tax paid by workers will rise from 4.2 percent to 6.2 percent and benefits for the long-term unemployed will expire if Congress doesn’t pull its head out of its collective fourth point of contact. Doctors will also face a 27 percent cut in Medicare reimbursements scheduled to take effect on 18 Jan 12.

The icing on the cake for the President is that 2008 Republican Presidential candidate Senator John McCain of Arizona showed his approval of the editorial tweeting, “WSJ is right on the mark here.”

When the smoke clears from this latest GOTP catastrophe, the President will once again come out on top, John Boehner may find himself stepping down as Speaker, and the Tea Party will come out as having attempted one bridge too far; come 2012 the bill will come due and local Congressional Districts will likely toss the riff raff out turning the House back to a Democratic majority. The Tea Party’s angry white guy shtick only plays so far and they’ve been on stage well past their collective curtain call. 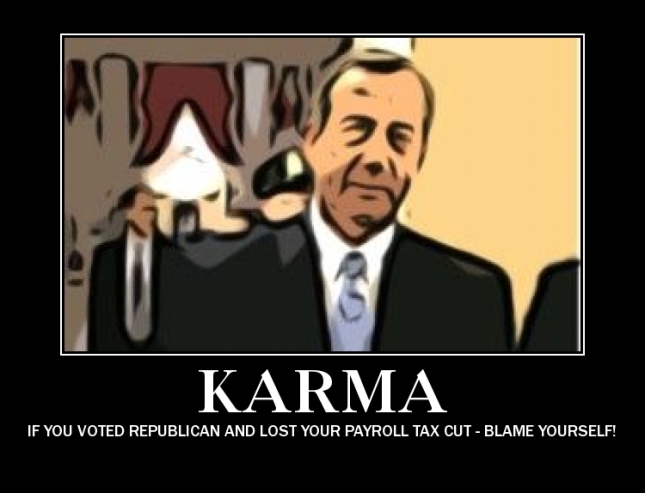 No tax extension for you! 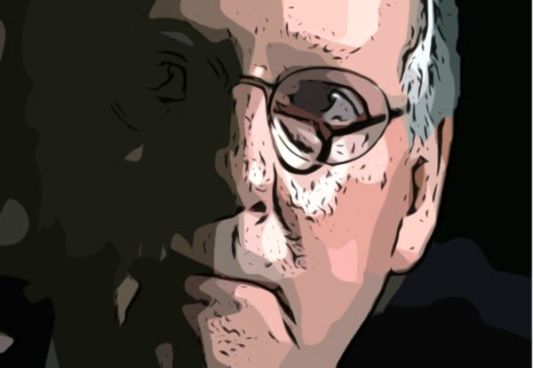 Once more, the Republican Tea Party (GOTP) members of Congress have proven who they work for, and it’s not the American people, at least not the 99% who aren’t uber rich. The Senate failed to pass an extension of a payroll tax cut, leaving in limbo a break that saved working class households about $1,000 a piece this year.

According to the Huffington Post, while Democrats sought to extend and expand the break, while paying for it with a 3.25 percent surtax on incomes over $1 million, just one Senate Republican, Maine’s Susan Collins, voted for the middle class break, which died 51 to 49 in an unsuccessful effort to end a Republican filibuster.

“I am extremely disappointed that Republicans’ insistence on protecting millionaires from paying a penny more in taxes has blocked our effort to extend and expand the payroll tax cut for millions of middle class families and small business owners,” said Sen. Patty Murray (D-Wash.).

One bright shining silver lining in this dark cloud is that moments after defeating the Democratic plan a GOTP version of the measure was blocked not only by Democrats but by a majority of the GOTP senators too.

Why did Democrats oppose it? Well for starters it was too small of a break — and it was supposedly going to be paid for on the backs of 200,000 federal workers who would be handed pink slips.

“Tonight’s votes highlight a sharp contrast between the two parties: Democrats voted to put more money in the pockets of the middle class families who need it most, while Republicans would only support a bill that exacts a price from middle class workers while protecting the wealthiest Americans,” Murray, the fourth-ranking Democrat, said.

A second bright shining silver lining was when Democratic Senators pointed to the defection of Republicans from the GOTP bill as an embarrassment for Senate Minority Leader Mitch McConnell, who’d been predicting there’d be support for some sort of payroll tax cut extension.

The President quickly pointed out how the GOTP was sticking it to the middle class, “Tonight, Senate Republicans chose to raise taxes on nearly 160 million hardworking Americans because they refused to ask a few hundred thousand millionaires and billionaires to pay their fair share,” he said. “That is unacceptable. It makes absolutely no sense to raise taxes on the middle class at a time when so many are still trying to get back on their feet.”

It’s difficult to fathom how the GOTP thinks sticking up for the wealthiest 1% while sticking it to everyone else is going to win any votes in 2012; McConnell’s always said it’s his first priority to make President Obama a one term president, but it’s very likely the President will win re-election, that the Democratic party will regain the House and in all probability extend its majority in the Senate. If you’re a Democrat running for the House, or Senate, all you have to do is point out this past year’s collection of GOTP protectionism of the wealthy while throwing everyone else under the bus; if you say it enough it will eventually stick.