The Newt rides the seesaw on Libya no-fly zone

Newt Gingrich spent a lot of badly needed brain cells last week criticizing President Barack Obama for not imposing a no-fly zone over Libya. Now the former House Speaker is lashing out at the White House’s intervention, calling it as “badly run as any foreign operation in our lifetime.” 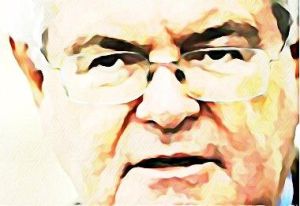 Really Newt, as “badly run as any foreign operation in our lifetime”? You can’t really be serious? I think Operation Iraqi Freedom will very probably go down as, if not the very worse, than one of the very worse foreign operations of not only our lifetime, but of all time. Second probably only to Xerxes’ decision to invade Greece in what we like to call “Operation Persian Folly”.

“The standard he has fallen back to, of humanitarian intervention, could apply to Sudan, to North Korea, to Zimbabwe to Syria this week to Yemen, to Bahrain,” the Newtered one said on the “Today” show Wednesday morning. “This isn’t a serious standard. This is a public relations conversation.”

As compared to, oh I don’t know? We’re invading Iraq because Saddam is a really, really bad guy, and he dresses funny, and therefore we’re going to take him out? Gee Newt, that thinking could have applied to any number of “bad guys” throughout the globe, like Kim Il-sung, Hu Jintao, Mahmoud Ahmadinejad, Rush Limbaugh, Sean Hannity or maybe even Glenn Beck. Talk about not having a serious standard on foreign policy decisions and U.S. military intervention. But wait, perhaps your standard would be more along the lines of such great successes as selling arms to the Contras? Or sending Marines into Lebanon? Or invading Somalia?

Yeah, if Newt were President he’d have sent in the guys on camels from Egypt; or maybe he’d tell the rebels if they really loved their country they should grab a congressional aide and have a good old fashioned affair.

Newt seems just a tad bit conflicted these days, just last week, he said he would implement a no-fly zone “this evening.”

“We don’t need to have the United Nations,” he told FOX PAC. “All we have to say is that we think that slaughtering your own citizens is unacceptable and that we’re intervening.”

OK, I’m sorry Mr. Former – I had to resign because I didn’t have any morals and lost my party’s congressional majority – Speaker, with all due respect, did you fall out of the stupid tree and hit every branch on the way to the ground? Were you dropped – repeatedly – as a child? Yeah, your idea of a foreign policy intervention has no ramifications whatsoever. Did you even bother call President Bush before you stole his plan for the Middle East, or did you come up with this all on your own? This is another really good example, in an ever growing list of examples, as to why you’re in no way remotely qualified to be President. Now, really, just back away from the presidency and you won’t get hurt; don’t make me roll up a newspaper and hit you on the nose with it; just back away like a good boy.