It’s being reported that while Republican Tea Party (GOTP) presidential hopeful Rick Santorum was visiting a firing range, during a campaign stop in West Monroe, Louisiana, taking a few shots at paper targets in front of an applauding group of supporters (cue the banjos) a woman called out (why am I not surprised), “Pretend it’s Obama!” 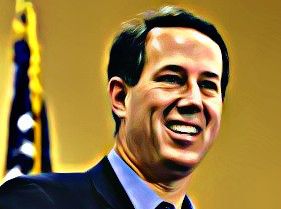 Because he was wearing hearing protection Santorum didn’t hear the moronic statement, and much to his credit he later told reporters he was glad he hadn’t heard it.

“It’s absurd,” he said. “No, we’re not pretending it’s anybody, but shooting pistols. It’s a very terrible and horrible remark, and I’m glad I didn’t hear it.”

This is one of those moments which defines a man’s character and adds to his stature and I applaud Santorum for standing up and saying the comment was wrong. It will no doubt cost him some votes with the type of people who say such things but in a tight primary season he did the right thing.

I like these little moments when I can see what his real values are, and that he knows when something is wrong. I disagree with most of what Rick Santorum believes in politically but I have a great deal of respect for him as a person and as a candidate because unlike other GOTP candidates his core values apparently can’t be shaken away and redrawn.

One response to “Santorum Condemns ‘Pretend its Obama’ Comment”