The United States Supreme Court decided to side with “We the People”, refusing to block early voting in the battleground state of Ohio, a ploy developed by the Republican Tea Party (GOTP) there in an effort to restrict voting. 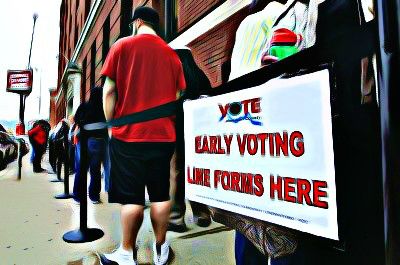 The court refused the GOTP request to become involved in the dispute over early voting in the state on the three days before Election Day, something that’s always been allowed in the past, but which the GOTP decided needed to curtailed during this presidential election year.

President Obama’s campaign along with Ohio Democrats sued the state over changes in Ohio law designed to take away the three days of voting for most people saying nearly 100,000 people voted in the three days before the election in 2008. But hey, what’s a mere 100,000 votes amongst friends? Well, in a state where only 262,000 votes separated the President from John McCain in 2008 that’s a sizeable chunk of votes being potentially disenfranchised.

In a time when the Supreme Court has given disastrous rulings regarding election spending – aka Citizen’s United – this is a fresh breeze of liberty blowing into the current election cycle.