Posted by PEB on November 22, 2013 in Constitution 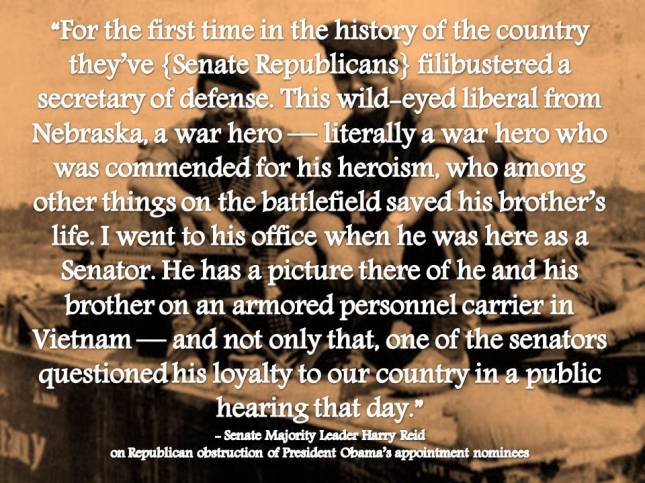 During the Vietnam War, Secretary of Defense Hagel served in the 9th Infantry Division from 1967 to 1968, reaching the rank of sergeant. He received two Purple Hearts, the Vietnamese Cross of Gallantry, the Army Commendation Medal, and the Combat Infantryman Badge. He served in the same infantry squad as his brother, and they saved each other’s lives on different occasions.

Of the Republican Tea Party (GOTP) Senators who filibustered his nomination as Secretary of Defense 32 of the 43 have never served a day in uniform – not one day; of those who have two were/are JAG officers – not exactly combat duty – three served less than a year and were discharged, and only one is a fellow Vietnam Combat Veteran with Hagel.

It’s never surprising to see how the far-right always manages to have war hawks who have never served, and yet who will criticize the service of those who have.