Boehner says his relationship with the President is frosty? 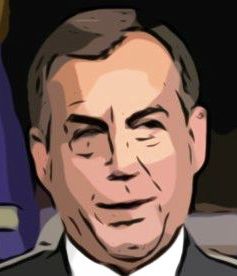 Wow, really? His “relationship” with the President has grown “a little frosty”? First of all Mr. Speaker, you have to have had a relationship with someone before it can grow “frosty”; second, refer back to the first point.

The Republican Tea Party (GOTP) puppet spent a lot of time whining on ABC’s “This Week” that the President is engaging in “class warfare” by pushing for higher taxes for wealthy Americans.

Boehner says the rich pay enough taxes and it’s wrong for the president to “pit one set of Americans against another.”

To quote former president Ronald Reagan, “there you go again”.

First, how’s it class warfare if someone suggests the uber-wealthiest 2% of the country’s population should have its taxes increased before chopping, slashing and burning programs to the poorest and most vulnerable, but it’s not class warfare when you staunchly defend the tax rates of the uber-wealthy while pushing to end programs for the poorest and most vulnerable?

The GOTP is playing bait and switch hoping the majority of the American electorate is too obtuse to notice; problem for Boehner and company is they’re not. Voters are beginning to notice, and as Tip O’Neil once said, “All politics is local”. Putting the entire GOTP House on record voting in support of the infamous Ryan plan was one of the dumbest things any Speaker has ever done, and handed any Democratic opponent a huge stick to beat their GOTP rival with. And if that wasn’t bad enough, the House wasted the entire legislative year with political stunts while American’s are out of work; this is going to come back to roost in November 2012.

How’d the GOTP spend its time? By saying no to each and every piece of legislation proposed by the President; by playing political dodge ball with the nation’s debt ceiling; by placating the uber-conservative Tea Party minority when it introduced more than 100 bills aimed on ending a woman’s right to choose, grand standing by staging an elaborate reading the Constitution (while leaving out an entire article) and by reaffirming the national motto of “In God We Trust”.

Bill Clinton beat the Republican incumbent in 1992 by proclaiming “It’s the economy stupid!” And guess what? It’s still the economy stupid! The GOTP’s playing its collective fiddle while the nation’s economy’s burning; hope Boehner’s enjoyed his time as Speaker.