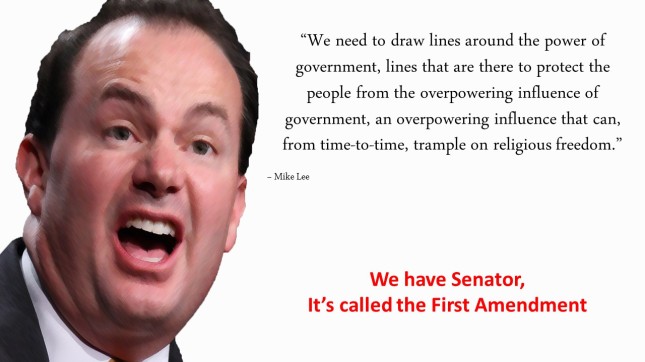 Posted by PEB on June 4, 2015 in First Amendment, Religion 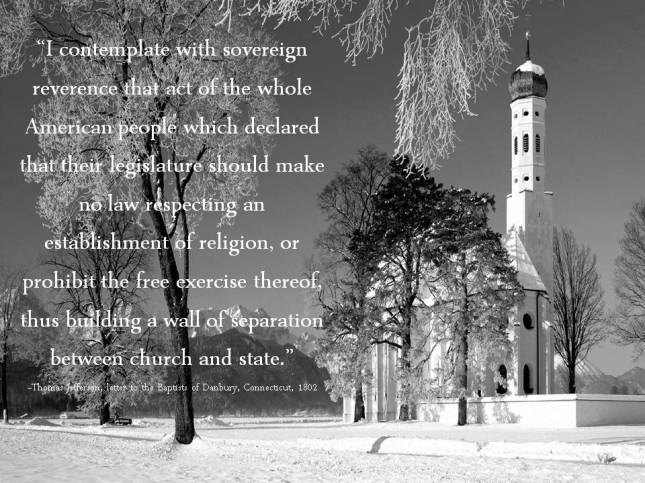 Posted by PEB on February 21, 2014 in Constitution

When there’s no separation between Church and State … 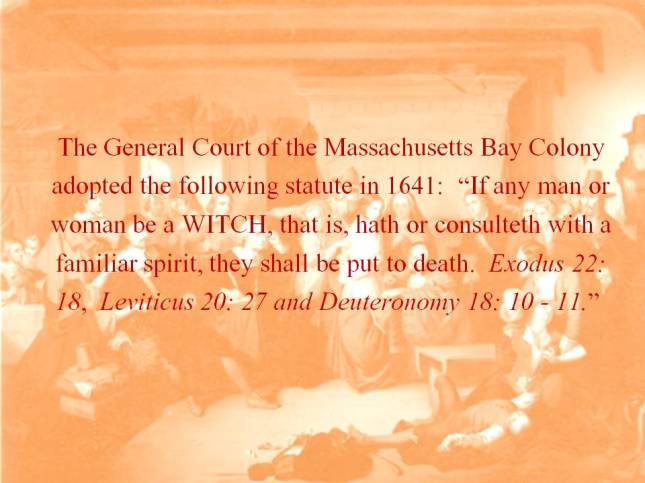 When there’s no separation between Church and State … 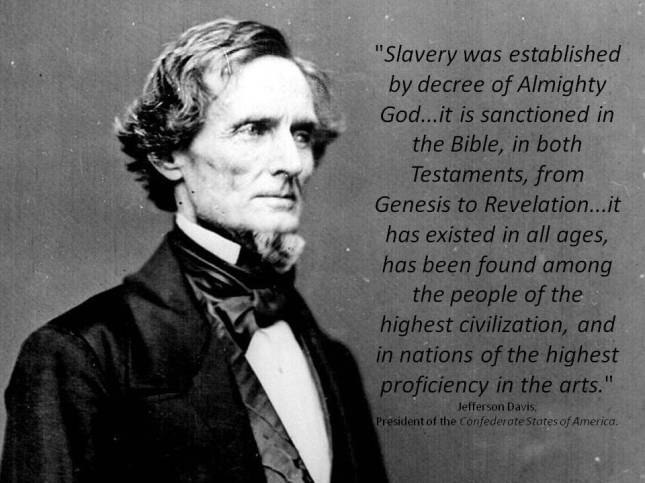 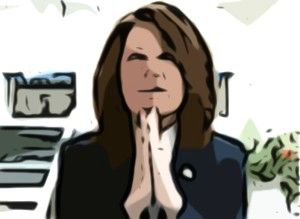 Texas Governor, and Republican Tea Party (GOTP) hopeful Reverend Ricky Perry is an uber-conservative evangelical Christian, as is Michelle “Krazy” Bachmann. What’s the big deal? Well, there’s a little tradition – as proscribed in the Bill of Rights and eloquently explained by Thomas Jefferson – we have here in the United States known as the separation of Church and State.

What’s alarming about the two “evangelical” candidates is that the evangelical faith believes Mormons – such as Mitt Romney and Jon Huntsman – and Catholics; particularly Roman Catholics – like Marco Rubio – aren’t Christian. In fact some evangelicals call the Pope anti-Christ.

So far, Rev Ricky hasn’t had to face scrutiny over his “faith”, but Krazy hasn’t fared as well, of course when you wear your religion on your sleeve and make comments like hurricane Irene and a recent earthquake were God’s judgments on DC, well you’re going to get asked questions.

For instance, during a recent GOTP debate Bachmann was asked to explain a statement she made during her 2006 congressional campaign when she said she submits to the authority of her husband, and she was asked – quite correctly – to explain whether, as president, she would submit to her husband’s authority. Krazy replied that to her, submission means that she and her husband respect each other.

Of course, that’s not what “submission” means; in fact in no definition of the word does it come even remotely close to meaning equal, or “respect for each other”; it’s the oft repeated mistake of the far-right candidates thinking they can say whatever they want to whatever audience and that no one will ever remember or dare question them about it.

But wait, that’s not all, it seems various news agencies have recently reported Bachmann’s former church, which she left right before announcing her candidacy; the Wisconsin Evangelical Lutheran Synod said on its website that the papacy is the anti-Christ. Now, while most Lutherans – such as the Lutheran World Federation – have dropped any hint of doctrinal condemnation, Krazy’s group – the Wisconsin Synod – has not.

Bachmann has insisted she was not anti-Catholic. But wait just a minute; President Obama was practically crucified for his association with the Rev Jeremiah Wright, with conservative talking heads – Limbaugh, Hannity et al – decrying how if Wright gave allegedly anti-American sermons in his meetings that had to have rubbed off on candidate Obama; and extending that same logic, if Krazy’s congregation was anti-Catholic was – and maybe is – she not anti-Catholic as well?

Or is this another case of uber-conservative Christian candidates thinking they can have their cake and eat it too? We’ll condemn President Obama by association, but not Bachmann? And when will anyone start questioning Perry’s ties to so-called “Christian” groups who are vehemently anti-Gay as well as anti-Mormon, anti-Islam, anti-Jew and anti-Catholic? Does America really need an uber-conservative evangelical Christian in the White House?

Joseph Smith Jr., founder of the Church of Jesus Christ of Latter-day Saints (Mormons) would no doubt be very uncomfortable with such an idea as he once proclaimed, “We do not believe it just to mingle religious influence with civil government, whereby one religious society is fostered (in the current 2012 case, evangelical Christians) and another proscribed in its spiritual privileges (everyone else), and the individual rights of its members, as citizens, denied.”

There’s little doubt that an evangelical dominated America would be an America where the rights of other faiths – particularly Islam – would be restricted, and certainly all other faiths would similarly find themselves on the outside looking in; more so, it will little serve America to have someone as President who is “submissive” to her husband, nor to have another far-right Texas Christian claiming to be doing God’s will as he bombs another Islamic nation. A candidate who subscribes to any faith that belittles or condemns other faiths does not belong in the Oval Office – period.

Scroggins is a Christian Jihadist?

Professor Bookbanner has also complained that the premises of democracy are atheistic and immoral, or inclined to assume a relativistic moral directive, “A democracy is based on an atheistic, humanistic worldview. Individual liberties (and everything else) are determined by the majority. It is majority rule. Underlying assumptions are that there is no absolute right and wrong. Morality is determined by the majority, it is relative. Man is free to do as the majority wishes. The desire of the majority determines right and wrong. It assumes man’s nature is good.”

Bookbanner, who is no doubt a devoted Glenn Beck worshipper, also proclaimed that, the “founding fathers” never had democracy in mind when they broke away from England,

“They feared and hated democracy. They possessed a Biblical worldview and knew that democracy could never sustain individual liberty for very long.”

Of course Bookbanner then produced a list of quotations from the “founding fathers”, all carefully cropped to support his very narrow view into the minds of some of the 19th-century’s brightest minds.

According to Bookbanner, Thomas Jefferson once said, “A democracy is nothing more than mob rule, where fifty‐one percent of the people may take away the rights of the other forty‐nine.”

But Scroggins – as many conservative jihadists today – picks and chooses what he claims the Founding Fathers said to incite groups like the Republic School Board to ban books.

Jefferson of course would never have penned something that sounded do Federalist in nature, and wrote repeatedly of his belief that his new found country was indeed a democracy and that Americans were democrats, “We of the United States, you know, are constitutionally and conscientiously Democrats.”—April 24, 1816, Letter to M. Dupont de Nemours

Dr Bookbanner, after misquoting the Founders in such a way to claim they would have supported his supposition that they hated democracy, demanded that “It is the duty of the Republic School District to teach the truth about our form of government.”

He also charged the Republic School District with teaching the “myth” that “the separation of church and state is a constitutional principle.”

Bookbanner claimed, “To teach children that a nativity scene, or anything else, violates the First Amendment principle of the separation of church and state is nothing more than a lie. It is the moral duty of this school district to teach the truth of this issue: that the separation of church and state is a myth and is not found in the Constitution. It is impossible to violate something that does not exist.”

Or to allow moronic college business professors to spread their misinformation to unsuspecting small town school boards in their attempts to have literature villified and banned. Scroggins is a small minded right-wing conservative jihadists wanting to enforce his own brand of Christian sharia law. He claims to love and revere the Founding Fathers but misquotes them in order to misinform the public; perhaps the Board of Regent at his university should begin sitting in on his classes to ensure what he teaches isn’t as equally incorrect?