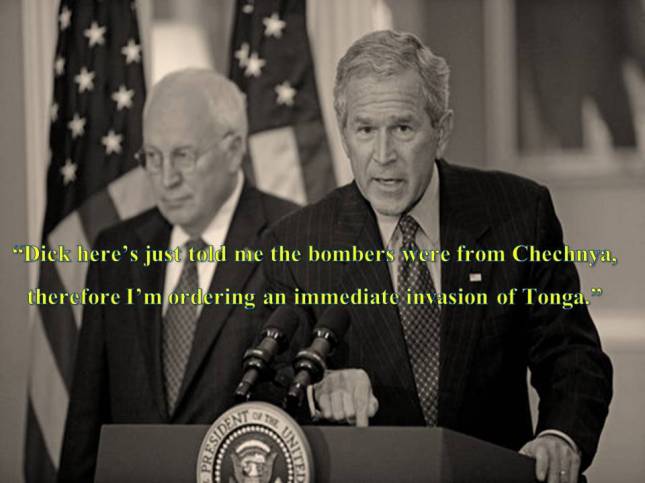 Somewhere in an alternate reality 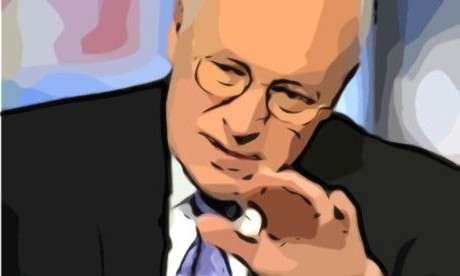 Only someone as twisted and convoluted as former Vice President Dick Cheney would think the President of the United States owes the George W. Bush administration an apology after taking out terrorist leader Anwar al-Awlaki.

And what would be Darth Obtuses’ logic behind such a bizarre statement? Well, it appears while appearing on CNN’s “State of the Union” Sunday, he said President Obama needs to apologize for his past criticism of how the Bush administration interrogated suspected terrorists.

The Obama administration “in effect had said that we had walked away from our ideals or taken policy contrary to our ideals when we had enhanced interrogation techniques,” the former vice president said. Al-Awlaki’s death indicates that members of the Obama administration “clearly have moved in the direction of taking robust action when they feel it’s justified,” Cheney said.

“Well I would,” Cheney responded, “I think that would be a–not for me–but I think for the Bush administration.”

“I think it was a very good strike. I think it was justified,” Cheney added regarding the strike against al-Awlaki, CNN reports. But Cheney added, “I’m waiting for the administration to go back and correct something they said two years ago when they criticized us for ‘overreacting’ to the events of 9/11.”

Did Obtuses fall out of the idiot tree and hit every branch on the way to ground?

There is a world of difference on using a drone strike against a terrorist convoy and torturing a prisoner. One is an actual act of combat against a combatant; the other is the ploy of the international thug attempting to extract information.

Bush/Cheney committed acts in violation of international law when they authorized the use of torture against prisoners; President Obama acted decisively and took out a number of enemy combatants with one drone. When one is fighting a war – as in the war on terror – one uses bullets and bombs. The President doesn’t owe you – or Bush – anything; be grateful there weren’t investigations into your conduct and slink back under your rock. 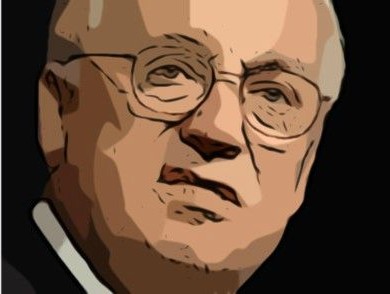 Excuse me? Cheney is insane; anyone who thinks the United States can torture prisoners and then complain when someone tortures Americans is certifiable. This is one of the biggest reasons – up until the dip stick brothers took office aka Bush/Cheney – why American personnel didn’t torture prisoners, along with the fact it’s in violation of U.S. and International laws; such as the Geneva Convention, of which the U.S. is a signatory. Plus, WE’RE THE GOOD GUYS! We don’t torture people!

Cheney was asked about a hypothetical case in which Iran would decide to use water boarding on an American suspected of spying.

Cheney replies, “I think we would object on the grounds that we have obligations to our citizens.”

And how far would any of our complaints go now? Absolutely no where because Cheney and Company thought it was a great idea; of course what would you expect from someone who was too busy collecting deferments to ever serve in uniform?
Cheney was asked on NBC’s “Today” show if he was embracing a double-standard, he said, “These are not American citizens.”

Again, Cheney has proven he’s insane. IT’S IN VIOLATION OF THE FRICKING GENEVA CONVENTION MORON! I – and countless others who currently wear, or have worn, our country’s uniforms – used to be able to proudly say, “American soldiers don’t torture,” but we can’t say it anymore. Now the best we can say is, “Currently, American soldiers don’t torture”.

In the interview, Cheney also conceded he’d been a lightning rod for criticism during the Bush administration. “I’m Darth Vader,” he said.

News flash Skippy, Darth Vader wasn’t the hero, he brought countless suffering upon millions and was the epitome of evil – oh wait, that describes you perfectly; but hold on; you can’t be Darth Vader because he served in uniform, and actually fought for his country, he didn’t seek countless deferments; maybe you can be Darth Obtusus?

It’s understood this is probably Obtusus’ last go round, his last attempt to set the record straight, to try to justify why he was “evil”; I know, “it’s all because he loves his country so darned much”. Unfortunately for Lord Obtusus, I don’t think his explanation is playing very well to anyone who doesn’t watch FOX – and I’m pretty sure that channel isn’t watched in heaven.