This is what happens when candidates like Sharon Angle glibly talk about using “2nd Amendment remedies”, or Sarah Palin speaks about “taking aim at Democratic Members of Congress”, or “reloading”. Words have consequences, and candidates, and talk show personalities, need to remember that. 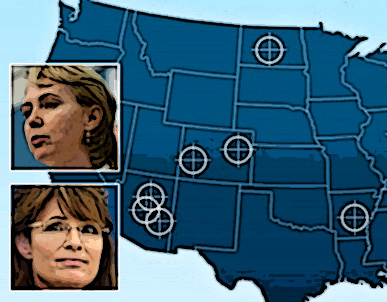 Oh look, Congresswoman Giffords has a gun site on her in this Sarah Palin poster … go figure why these kind of people pull guns and shoot members of Congress.

“Americans (Republicans) are going to have to start using 2nd Amendment remedies if the voters don’t get it right,” former TPGOP senate candidate Sharron Angle told a crowd at a campaign stop last fall.

The attack on Democratic Rep. Gabrielle Giffords and those who were with her last month might be the work of “a single nut,” said Democratic Rep. Raul Grijalva, whose Arizona district shares Tucson with Giffords’ district. But he said the nation must assess the fallout of “an atmosphere where the political discourse is about hate, anger and bitterness.”

People like former TPGOP Congressional candidate  Jesse Kelly among them. During his campaign effort to unseat Giffords in November, Kelly held fundraisers where he urged supporters to help remove Giffords from office by joining him to shoot a fully loaded M-16 rifle. Kelly is a Marine who served in Iraq and was pictured on his website in military gear holding his automatic weapon and promoting the event. But of course Jessie Kelly doesn’t want to accept that “targeting” your opponents plays into people like this. His “honor code” as a Marine only goes so far.

Sadly one of the victims killed in the attack refused to press charges people who had threatened his life.  In 2009, Judge Roll ruled that the case Vicente v. Barnett could go forward. The $32 million lawsuit brought by the Mexican American Legal Defense and Education Fund (MALDEF) against Arizona rancher Roger Barnett (one of those good old white, god fearing christian fellas) on behalf of 16 Mexican plaintiffs charged that the plaintiffs were assaulted, threatened, and held at gunpoint by Barnett and members of his family. After Roll’s ruling – and prompted by several talk-radio programs – he was the subject of hundreds of complaining phone calls and death threats and he and his family were under the protection of the U.S. Marshals Service for a month. Roll declined to press charges when some of those who made threats were identified.

Funny how people like Sarah Palin think its just savey political speech to “target” opponents, and to portray them as “enemies” of freedom and democracy, but those who are “targeted” as a result, men like Judge Roll, choose the higher ground and don’t press charges, and then ultimately pay for it in the end.

‎It was Giffords father, 75-year-old Spencer Giffords, who wept when asked if his 40-year-old daughter had any enemies, and answered, “Yeah,” to The New York Post, “The whole tea party.”