Romney says, ‘I Have Paid Taxes Every Year; a Lot of Taxes.’

According to news reports, Republican Tea Party (GOTP) presumptive presidential wannabe Willard Mitt Romney is insisting he’s paid taxes every year and is challenging Democratic Senate Majority Leader (and fellow Latter-day Saint) Harry Reid “to put up or shut up” with his accusations he hasn’t. 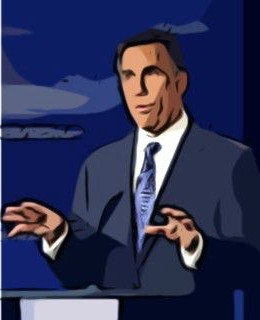 “Harry Reid really has to put up or shut up, alright? So Harry, who are your sources?” Romney whined, referring to the Senator’s claim a Bain Capital investor told him Willard hadn’t paid taxes in 10 years.

As the GOTP candidate has been continually pressured to release his tax records, and was asked yet again why he wouldn’t just release them rather than continue engaging in a back-and-forth with Senator Reid, Willard deflected saying people should visit his website to see his financial disclosure statements dating back to 2002 and his 2010 tax return.

“Go on the website, you’ll be surprised to see the amazing amount of data that’s associated with our campaign’s disclosure,” he said.

Yeah, about that; I went to the “website” and was surprised to see nothing at all regarding Willard’s tax records or financial disclosure, at least not easily found. Perhaps he was referring to his offshore website, the one in the Caymans?

Despite Romney’s whining about the unfair amount of taxes he’s allegedly paid, Senator Reid said it’s time for Willard to stop “insulting” the American public by refusing to release his tax returns.

“It’s hard to say which is more insulting to Americans’ intelligence, Mitt Romney’s tax plan or his refusal to show the American people what’s in his tax returns,” Reid said in a statement. “Romney seems to think he’s above the basic level of transparency and openness that every presidential candidate has lived up to since his father set the standard in 1968.”

“In short, Romney’s message to Nevadans is this: He won’t release his taxes, but he wants to raise yours.”

He accused Romney of being “the most secretive presidential candidate since Richard Nixon” and pointed out that even nominees overseen by the Senate Finance Committee have to produce more tax returns that Romney is willing to release.

“Forget about president — Mitt Romney couldn’t get confirmed as a cabinet secretary,” Reid said. “The contents of the one year of returns he has released would probably be enough to tank his nomination anyway: secret overseas bank accounts in Switzerland and the Cayman Islands, tax avoidance tricks and a lower tax rate than middle-class families pay.”

Whatever Senator Reid’s reasons for suddenly going after Romney on this issue it’s a political strategy which is a win/win for Democrats and a lose/lose more for Romney. If Romney continues to refuse to release his taxes the furor won’t go away and it won’t lessen in intensity. This began back during the GOTP primaries when his opponents – fellow conservatives – went after him on his tax records.

To not release makes him look elitist, out of touch and possibly hiding something very messy. To release could affect his campaign by some embarrassing fact like he paid less in taxes than average Americans. We already know that, its old news. Politically this is not a smart play. Romney should remember Nixon’s famous “Checker’s Speech”; he should release the records declare what’s in them, especially if there’s anything that could draw fire, and move on. Get the splinter removed before it festers and becomes the equivalent of political blood poisoning. Or, just keep arguing about how “it’s not required by law”, and “I have a right to privacy” blaah, blaah, blaah …