Republican Tea Party (GOTP) presidential candidate Herman “Pizza Man” Cain has dropped out, and fellow GOTP hopeful Michele “Krazy” Bachmann has decided she deserves to inherit the support formerly given to him; why would they do that you might ask?

“A lot of Herman Cain supporters have been calling our office and they’ve been coming over to our side,” she said on CNN’s “State of the Union.” “I think they see my voice will be most reflective of his.”

Of course all polling numbers to the contrary. Cain’s campaign began unraveling in recent weeks as allegations of sexual misconduct became more numerous, capped with the revelation he’d allegedly been involved in an affair with a woman for the past 13 years; coupled with astonishing flubs and mistakes during interviews and it was over; but even as its been falling apart and his poll numbers have been dropping, there’s been no corresponding rise in Bachmann’s numbers. Let me say that again, there’s been no corresponding rise in Bachmann’s numbers; zero, zilch, nada …

Bachmann said Tea Party voters will ultimately “come home” to her campaign and boost her bid for president at the upcoming Iowa caucuses.

“When they find out I’m the candidate that stands the most for their values, that’s when they come home,” she said on CNN.

Really? Well, the latest Des Moines Register poll of likely voters, conducted 27 – 30 Nov 11, shows no indication of flocking as of yet, and they show absolutely no increase in Krazy’s numbers when compared with an Insider Advantage poll conducted at the beginning of the month. Bachmann’s polling percentage has remained pretty consistent at about 8% for the entire month, while Cain’s meteoric rise of 30% plummeted to 8%; and where’d his voters go? It appears the majority went to Newton Leroy Gingrich who rose from 12 to 25%, and to Ron Paul who rose from 9 to 18%.

So you keep on dreaming Michelle, you keep on having those “happy thoughts” of how Cain’s supporters will rally to your banner, and carry you on to victory; those and some fairy dust, and one day you’ll fly Peter Pan.

And then there were seven – Cain says good-bye 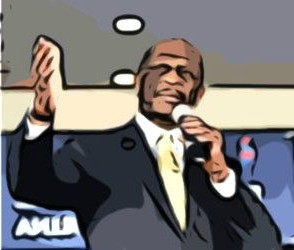 “I am suspending my presidential campaign because of the continued distractions and the continued hurt caused on me and my family,” Cain told several hundred supporters gathered at what was to have been the opening of his national campaign headquarters.

So, Cain’s dropping out because of the evil media’s coverage of the sexual allegations, but not because of his own misconduct?

Cain’s announcement came five days after an Atlanta-area woman claimed she and Cain had an affair for more than a decade, a claim which followed several allegations of sexual harassment against him.

“But because of these false and unproved accusations, it has paid and had a tremendous painful price on my family,” Cain said, with his wife, Gloria, standing behind him on the stage.

And with that Herman “Pizza Man” Cain becomes a footnote to the 2012 GOTP Presidential primary season; good-bye Herman you’ve provided us all with hours of rib tickling entertainment.