Coulter on how Republicans Win… 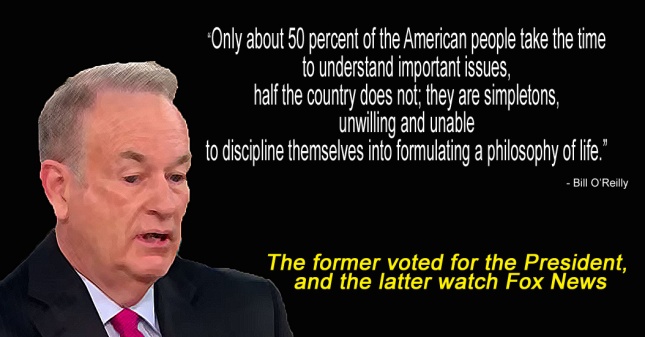 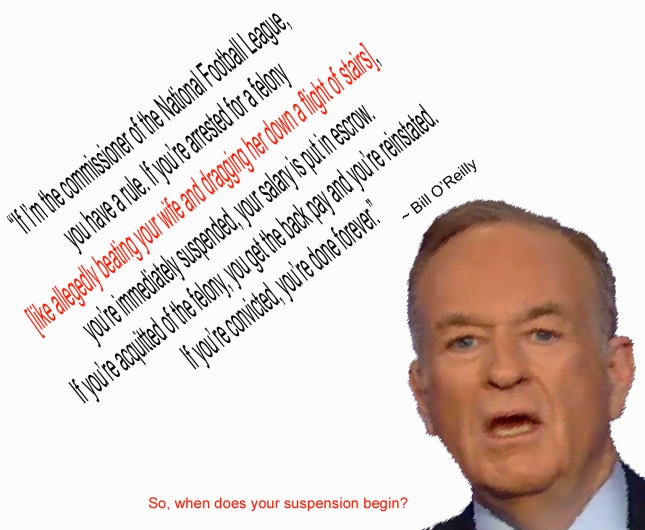 Posted by PEB on May 23, 2015 in FOX PAC Hypocrisy, Right Wing Crazies

O’Reilly Decries Use of “Nazis in Analogies” — But He Uses Them All the Time?

Media Matters is pointing out typical FOX PAC hypocrisy after Bill O’Reilly discussed the recent uproar over Hank Williams Jr. invoking Adolf Hitler while criticizing President Obama; O’Reilly said that it’s “always bad to use Nazis in analogies.” But O’Reilly himself has a long history of using Nazi analogies.

“He was trying to make an analogy, and [it’s] always bad to use Nazis in analogies — you don’t do this. And he basically said, look, if you get guys together like President Obama and Speaker [John] Boehner it’d be like Hitler playing golf with [Benjamin] Netanyahu,” he said.

“I’m of two minds. It’s dumb to bring Hitler up, you’re absolutely right. Can’t do that in this PC society. But what he said, it isn’t — he isn’t comparing Obama to Hitler. He’s comparing the situation, the strange bedfellows. He’s not saying Obama’s Hitler. Williams isn’t saying that. I mean, I’m just trying to be fair here, OK. But it doesn’t matter, I guess.”

OK, whatever Bill; the only man Williams could find to use in his analogy was Adolph Hitler? No, he meant to compare the President to Hitler, this isn’t some “honest mistake” it was a white red neck comparing the first Black President to the Nazi Dictator.

But even though O’Reilly claims using Nazi analogies is not smart he’s done it a number of times.

On his 2 Mar 2010 program O’Reilly claimed that liberals who support gun control are “today’s totalitarians.” He added that in the past, people like “Hitler and Mussolini” held such positions in favor of “state control.”

In his 16 Jul 2009, syndicated column, O’Reilly wrote, “The far left is trying to create a huge federal apparatus that will promote income redistribution and ‘social justice.’ Also, the left sees a major opportunity to knock out Judeo-Christian traditions, replacing them with a secular philosophy.

“In order to accomplish this, the left-wing media is marginalizing people like Sarah Palin who oppose the strategy. Under the guise of hard news reporting, the media is pushing rank propaganda on the citizenry. Dr. Joseph Goebbels, the Nazi propaganda minister, successfully developed this tactic in the 1930’s.”

On his 10 Mar 2008 program O’Reilly said, “And I said that these tactics that are being used on this website, The Huffington Post, are the same exact tactics that the Nazis used in the late ’20s and early ’30s to demonize certain groups of people, so it would become easier for them, the Nazis, when they took power, to hurt those people.”

On his 16 Jul 2007 program he said that the Daily Kos is “like the Ku Klux Klan. It’s like the Nazi party. There’s no difference here.”

So, oh yes, it’s “always bad to use Nazis in analogies” unless of course you’re Bill O’Reilly.

If “The Islamic Brotherhood” Takes Power In Egypt, “Then It’s World War III”?

According to FOX PAC talking circus performer, Bill O’Rilley (aka Bill the Clown), “If the Islamic Brotherhood takes power In Egypt, then it’s World War III”. Really Billo? It’s World War III? How do you people at FOX PAC sleep at night? Between your gloom and doom 24/7, and lying through your teeth for 99.9% of that time, how can you sleep? 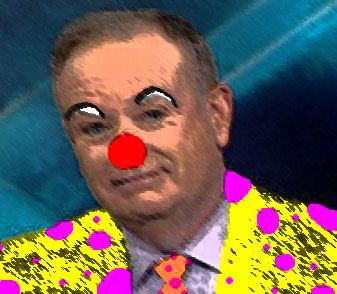 It appears FOX PAC is wishing and hoping that Egypt not only becomes President Obama’s Iran, but that it also becomes the next world war. You’ve got Reverend Beck proclaiming this is the real Archduke Ferdinand moment he’s been warning us all about (we’re up to the seventh so-called moment since President Obama took office), and now Billo the Clown is proclaiming it becomes the third world war if the Islamic Brotherhood take over the government in Egypt. But, have you noticed? Not one of the gloom and doomers at FOX, not Rush, nor any of the right wing talking bovines or politicians who have been, and continue to be, so critical of the President have offered one concrete suggestion of what he should have done, or of what he should do know.

I understand the right-wing crazies got used to the Bush Doctrine (well, all except Sarah Palin who doesn’t know what that is) and I’m sure their solution would be to invade Egypt, or at the very least start bombing Cairo and Alexandria if the Islamic Brotherhood takes over; how sad for them we now have a President who doesn’t share their view that America can, and should, preemptively invade or bomb anyone we choose.

Besides talking to Mubarak on the phone and giving him advice that he really needs to step down, that the United States gravy train is not running any more, what more can the President do? And, oh, a by-the-way right wingers, Mubarak is a dictator. You know, the same kind of person you yelled and screamed had to be pushed out of Iraq. “But he was our dictator!” “He was our kind of guy!” They would all no doubt collectively shout. But, what can the President do, that he isn’t already doing? We – as a people – would never stand for another nation interfering in our internal affairs. We – the United States – do not own the world, even if it’s true we are the only true super power in the world today, we don’t have the legal the authority, or the right, to tell other countries what to do, or to invade and bomb because we can. We, like the rest of the civilized world (basically anyone not glued to FOX PAC, and listening to right-wing talk radio all day) must watch as these events unfold, and then see what has filled the vacuum in Mubarak’s absence.

What’s in a Handshake? Or Presidents Meet with Bad People?

The rightwing talkers have their knickers in a knot because President Obama shook hands with Venezuelan President Hugo Chavez. Oh no! Disaster on a global scale! Human sacrifice, dogs and cats living together, mass hysteria!

Grow up people. World leaders shake hands with each other; they may even appear to be palling around with each other. It doesn’t mean they’re selling us out.

During his Fox “News”’ The O’Reilly Factor, on Wednesday night, host Bill O’Reilly once again demonstrated the fact that he doesn’t know jack about history, when he falsely claimed that President Richard Nixon never met with Chinese leader Mao Zedong, and hence never shook his hand.

While discussing President Obama’s handshake with Venezuelan President Hugo Chavez, Fox News political analyst Alan Colmes asked O’Reilly, “What do you, ignore somebody standing right next to you? Do we — because he touched him, put his hand on his shoulder, shook his hand? Do these people have a problem with Mao and Nixon?”

O’Reilly responded, “It was [Chinese Prime Minister] Zhou [Enlai] and Nixon. Mao was not involved.”

If I had been Alan Colmes I probably would have started my response, “Bill, you ignorant slut, once again you’ve proven you don’t know any more about history than you know about homeless veterans.”

In fact, Mr. Wizard, President Richard Nixon not only met with Mao on February 21, 1972, and horrors, he smiled at him, and he even shook his hand.

I now understand why Alan Colmes couldn’t continue working every night with these guys. After attempting to communicate on an intelligent level with Mr. O’Rielly, Colmes said, “And now, I know that you people often think you — when I say “you people,” I mean, you — probably think that dictator DNA got off on him, and he’s going to come back and infect the United States because, look, he touched the guy.”

O’Reilly – aka Mr. Wizard – asked Colmes, (referring to the shocking handshake between President Obama and President Chavez) “…what did you find worthy about it?”

Colmes’ reply was the kind I’m usually shouting at O’Reilly, whenever I can stomach watching him, “Well, first of all, this shows — first of all, what do you, ignore the guy? When George W. Bush was at the UN and asked, “Will you ever — will you talk to Ahmadinejad if you’re in the same room?” “No, I won’t talk to him” — like a 5-year-old.”

Have any other Presidents ever shaken hands with dictators, and, you know, smiled?

Well, let’s have a look Billy.

Dick stop palling around with Leonid!

Holy stop touching that Russian Bat Man! Truman and Churchill both touching Joe, and liking it!

And what’s this? The Gipper and Gorby shaking hands? The leader of the Evil Empire?

OMG! Bill! They’re even palling around!

One last imagine to consider:

Yes Bill, that’s our former U.S. President George W. Bush, smiling and shaking hands with President Pervez Musharraf of Pakistan. Musharraf is the self-proclaimed president of Pakistan, having come to power through a military coup. He’s a dictaitor. But, we can pal around with him because he was willing to help us defeat the Taliban. The enemy of my enemy is my friend, even when they let my enemy move into their country to escape being attacked.