Bachmann says GOTP nominee must be true conservative, just like her? 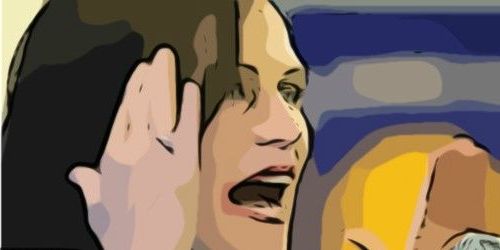 According to the Associated Press (AP), former Republican Tea Party (GOTP) darling Michele “Krazy” Bachmann is reportedly dismissing concerns about the strength of her campaign and told supporters she alone has the best conservative credentials to be president.

“I’ve got the complete skill set to do this job,” she told a huge crowd of roughly 35 people in a half-full Cedar Rapids, Iowa hotel ballroom on a dreary rainy day.

Wow, a whole 35 people?! That’s incredible; however did you manage such a huge crowd, especially with the rain and all?!

Krazy suggested some of her GOTP opponents couldn’t be trusted to repeal Obama’s health care law – aka Mittens Romney; and the rest didn’t understand foreign policy as well as she does and some were compromised because they’d done favors for political donors – aka Reverend Perry.

Bachmann thanked the people for showing up and tried to justify the dismally light attendance.

“I know it was short notice,” she said, “it’s in the middle of the day, everyone’s at work, it’s a rainy day, there’s a lot of places you can be.”

Her Brain Captain continued the thought, “And I know there’s lots to do in Cedar Rapids, like watching the grass grow or the paint drying, and I am just so doggone happy and thrilled you gave up those events to come listen to me try to continue to justify my pitiful existence as a presidential hopeful.”

According to the AP, Krazy shook nearly every hand in the room and signed autographs.

Wow, she shook nearly all 35 hands?! That’s incredible; however did she manage to get around to nearly everyone in the room?! It must have taken minutes!

Krazy strongly dismissed suggestions her campaign was floundering, saying voters would pick the nominee, not the news media. And she said she believes she is “positioned perfectly right now” to compete for the nomination because conservatives are looking for someone with her fiery message and record of opposing Obama.

And this ship is entirely capable of making it all the way to New York in spite of that huge gaping hole running along her side.

She’s certifiable; she’s completely 100% certifiable; there’s no way – NO WAY – she’s ever going to win the nomination. She hasn’t had a snow ball’s chance since day 1 and she hasn’t got a snow ball’s chance now. The only good thing about her continued candidacy is that she’s providing the comic relief – watching her campaigning is like watching Lucille Ball or Mary Tyler Moore on crack.

As Bachmann’s star begins to plummet? 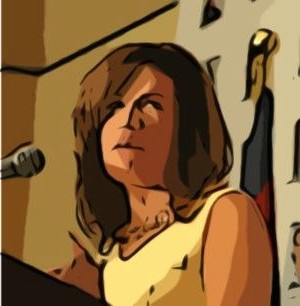 Republican Tea Party (GOTP) wannabe Michele “Krazy” Bachmann’s presidential star is plummeting faster than it rose, so, what to do; what to do?

I know! Go back to Iowa! They love her there!

“We know that when Michele is in Iowa, she wins,” said Bachmann’s Iowa campaign chairman, Kent Sorenson. “If she’s here, she’ll win Iowa.”

Face it boys and girls, Krazy’s been eclipsed by someone even more crazy, and more right-wing and more appealing to the uber-conservative evangelical voters of the Tea Party; she’s been eclipsed by the Reverend Ricky Perry’s travelling prayer fest and secession tour.  She no longer holds the interest of her base. Uber-conservative evangelicals don’t want a woman for president if they can have a man any more than they want a black man in the White House. They want their women submissive and in the kitchen, not in the Oval Office. Krazy was an anomaly, and then Reverend Ricky came along; a person with the same crazy message but who was a man.

As Dandy Don used to sing at end of Monday Night Football games, “Turn out the lights, the party’s over …”

Republican Tea Party (GOTP) presidential wannabe Reverend Ricky Perry is calling ObamaCare “the closest this country has ever come to outright socialism” and in his political manifesto, Fed Up Ricky claimed the individual mandate was, “a total outrage;” he’s also declared if – God forbid – he was elected President he would use an executive order to repeal or block as much of ObamaCare as he possibly can.

This is all very interesting, but during the Clinton presidency Ricky wrote a letter to First Lady Hillary Clinton saying, “I think your efforts in trying to reform the nation’s health care system are most commendable.”

Ricky also asked Clinton to “give particular attention to the needs of the nation’s farmers, ranchers, agriculture workers, and other members of rural communities,” noting that many of them were uninsured and faced shortages of healthcare services. “Again,” Perry wrote in conclusion, “your efforts are worthy…. Please do not hesitate to contact me if I can be of any assistance.”

Perry spokesman Dave Carney defended the Reverend’s letter stating, “You need to read the letter. He praised her efforts in trying to tackle the issue and urged her not to overlook rural Americans. The letter was at the onset of her efforts before she proposed anything. No one could have imagined the horrible monstrosity she cooked up, in fact not to be outdone until ObamaCare years later.”

Carney needs to go back and read history about the 1992 campaign, if he did he would discover that then candidate Clinton was not shy on pushing for an individual mandate, a single payer program; so, either Carney is ignorant of the facts or he’s a liar. Perry knew full well what kind of healthcare program Hillary Clinton would be looking to implement.

Ricky however is also pleading the case of ignorance telling Sean Hannity he was clueless as to what the ultimate outcome of Clinton’s healthcare task force was, “I didn’t want them collectively to overlook a very important constituency. I had no idea that was going to be the end product. What I thought they were truly going to work towards was trying to reform healthcare, and we had no idea, and then now we’ve got ObamaCare.”

Reverend Perry – like his spokesman – is either ignorant to facts of history or he’s a bald faced liar; I think it’s the latter.

On 21 Apr 11, Republican Tea Party (GOTP) presidential aspirant, the Reverend Ricky Perry issued an official “Proclamation for Days of Prayer for Rain in Texas”; isn’t it interesting that since that gubernatorial edict was issued drought stricken Texas has received little to no appreciable rain, while Tropical Storm Lee dropped major rain in the neighboring state of Louisiana. Adding insult to injury, winds from Lee have fanned wildfires across Texas.

Clearly, the Lord doesn’t recognize Reverend Ricky’s authority to issue proclamations for days of prayer in His name.

Maybe He wasn’t happy with the company Ricky kept at his prayer fest?

Maybe Perry should have asked Romney or Huntsman to issue the proclamation?

Maybe God’s pointing out there’s a clearly defined separation between Church and State in America and politicians shouldn’t blur the lines to score political points prior to jumping into a presidential race?